Friday Flashback: Moving On Up...

With very little fanfare, we just passed the two-year anniversary of moving into our apartment. We actually spent the first night in our apartment on January 22, 2005, but our lease began on February 1st (complicated partial monthly rent back-payment to previous tenants...don't ask). What that means is that since we signed a two-year lease, we are now free to move whenever we wish without penalty.

During the first two years of our lease, if we had wanted to move, the onus would have been on us to find new tenants to lease. Of course, the landlord would have to approve the new tenants, and...well...let's just say that it's a situation best avoided.

So now the state of things is such that all we have to do is give a three-month notice if we want to move. Not that we're looking to move in the immediate future, mind you, but it's nice to know that the option exists should the situation warrant. 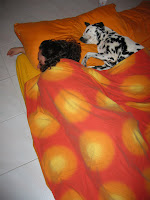 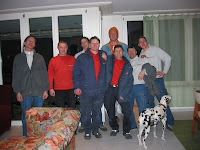 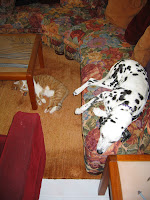 I went to the extensive TBF photo archives and blew the dust off of these pictures from moving week/January, 2005.

We woke up the first morning (with stiff backs) after sleeping on the trusty, old futon mattress; that space is now taken up by the "puzzle table". The waterbed was set up a few hours after that picture was taken because there was nooooo way I was sleeping on that mattress for a second night.

A few days later (on the coldest day of the year), I threw on my work gloves and helped (we were paying by the hour) the moving crew make the 7 km./4 mile move to the new apartment. My God! Look at how red my cheeks are. It kind of makes me wonder who was doing all the work. Well, apparently the pets were, because they were exhausted!

The picture with the moving crew makes me sad because this was when our dog - Dominique - began her quick spiral downward and began to have bouts of confusion (as you can obviously tell). We had to put her down less than two months later. King, on the other hand, is still terrorizing us with his toys during the night and feels the need to tap my nose every morning around 5:00 a.m. when he feels I should be getting up to feed him.

LOL! You remind me of a healthy-red-cheeked-mountain-Swiss, TBF!

PS: I wonder if THAT will ever appear in you google/yahoo searches

Wow you had that many people moving you? I only had 3 last time!

I love it. A photo of you with the moving crew. All I did with mine was feed them lunch.

King - I thought I told you to stay off that computer when we're away...

Dixie - We didn't feed them anything, but we did give them some "trinkgeld"!

I have a real soft spot for Dalmatians. My college boyfriend had one named Disney and she was the coolest dog. She spent her summers with me since I stayed at school and had a laid back job where I could hang out with her a lot.

wow! Never knew it's only been 2 years, thought you were there longer but it is a great piece of mind for sure... We had to do 6 months to get more money back..

I must say though that Dominique is so adorable next to mrs TBF!

It might be the last place he ever lives if he keeps tapping you on the nose at 5am!!!