Going Back For More...

I just received an e-mail confirming a flight I booked last week for going to Chicago in April. I used 90,000 Aadvantage miles so that I could fly round-trip in Business Class. That leaves me with only a few thousand miles in my American account.

Mrs. TBF just booked two first-class, round-trip Tokyo tickets for October on British Airways; we're going to be going to Japan to celebrate our twentieth wedding anniversary. These tickets required over 300,000 miles AND her gold coupons, and they pretty much wiped out her account.

I'd better make sure that I totally enjoy these flights, because I might have to (and it pains me to say it)...fly...Coach (GASP!)...until we build up the miles again.

Getting back to Chicago...

I've been going through a bout of home-sickness lately, and I figured that I'd up the Chicago trips to three to four times per year. If you'll remember, I was just there at the end of January, I'll be going back in April, we'll probably both fly to Chicago in August and then drive up to Canada for my cousin's wedding, and then we've been talking about possibly going at the beginning of December. 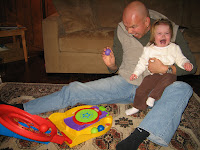 Yo Finn,, Pietsch again, I wondered why you hadn't emailed I went back and checked your comments, I guess it wouldn't go through, email is correct, not sure why??
I just emailed Pasqualli and gave him your web blog address here, he's a freaking Lawyer now specializing in transportation.

Try my work email at: bill_pietsch@jbhunt.com

Man, you and Mrs TBF got out of town just in time, we went into the deep freeze Superbowl weekend, and we got a blizzard yesterday.
Out in the burbs by us we have about 12 or so inches on the ground.


Hey, ho about those Bears, did you see Ditka has a wine collection now? I have a Grossman jersey 2XL for sale if you are interested,I'm willing to deal!!!!! :-)

Even though all these postings make it seme like you have the life of Riley, I know you miss being around us working stiffs, especially us freight beggers

Little niece does NOT look happy AT ALL! I think you need a remote chopper to keep you busy and leave the kids' toys alone.

that picture is priceless!

CS - What I need is one of those bounce-the-ball-into-the-hole toys. That damn thing was addictive!

Sara - Thanks. I think so too.

Michael - I just thought we'd better go and eat some of that great fish before it all disappears from the ocean. Also, I've already told Mrs. TBF that I'm going for a "soapy-soapy-washy-washy" AND I've gotten her to agree to participate in a reenactment of the "...lip my hose" scene from Lost In Translation.