King da Cat is old! How old? We really don't know for sure since we adopted him as a stray from a shelter, but we estimate that he will be 19 years old (the equivalent of 89 human years) this May. Yup! O...T...D! Older Than Dirt!

If you'll remember from last week, King was a bit sick and had a rather unpleasant episode of vomiting and diarrhea. Sure, he vomits every now and then (most cats do), but I knew he was sick when I noticed the diarrhea. That's because, normally, he has the opposite problem: nuggets hard as granite!

We've tried cat grass (works sometimes) and various hairball eliminators mixed into his food (eats it for awhile, and then won't touch it), but nothing seems to ease the strain of his kitty constipation. So, today while picking up thyroid medicine for the beast (gettin' old's a bitch!), I mentioned it to the vet who decided it was time to move onto heavier artillery. 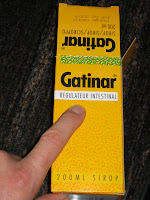 The Germans call it: Darmregulans

The French call it: Regulateur Intestinal

The Italians call it: Regolatore Dell'Intestino

I just about snotted when he said that! 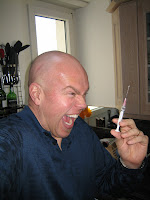 Then, the vet pulled out a syringe. I took the syringe into my hand, and...this is a recreation of how I imagine my face must have looked when I imagined the pure joy of being put in charge of giving King daily injections. However, no such luck! The syringe is just used to draw the "...sveet liqvid" from the bottle before indiscreetly mixing it into King's food. I figured that King would shun it, but I determined that I hadn't added to the Rejected By King Collection" for awhile, and thought..."what the heck?" 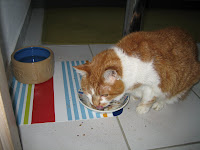 I wasn't very optimistic when I was mixing into his food, but...the beast proved me wrong. Just look at that pig licking his chops. He loved the stuff so much that he even went around and licked up the food that flew out of his bowl while he was gorging himself.

Then, I realized that the old lunker didn't know that the syringe wasn't for injections, so I decided to torment him for a few minutes by chasing him around the apartment with the syringe. 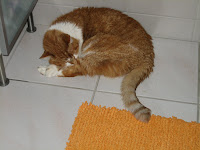 He didn't seem too concerned. He ran straight to the bathroom, and went to sleep on the warm floor.

I must say our little spunk looks so close to King himself...

Maybe it's the warm floor that keeps him going... =)

However, from your last sentence, I only assume that his "nuggets" are no longer like granite.

so when king was a young wee kitten, did he enjoy sleeping as much as he does now? or is it the joy of radiant heat? (When i lived in Zurich i too would hang out on the bathroom floor)

cncz - We adopted King when he was approximately 2.5 years old, so we missed out on the young wee kitten stage. As a matter of fact, he was even bigger then than he is now. I seem to recall him topping out at 16 lbs., as opposed to the 12 lbs. he is now.
He's always been a good sleeper, but I think the combination of age and radiant heat causes him to enter the über-hibernation zone.
BTW...I'm happy to report that Gatinar is a success!

You are a twisted, twisted man! The expression on your face is priceless!

Tiina Fish - Yes, he is. The litter box is getting much more use now.

Too Funny...I am also Canadian living in Switzerland. I came across this post when doing a search on "Gatinar". The doctor prescribed it to my 2 year old son. Poor wee thang is having those "nuggets" too.

Thanks for the chuckle and so I am off to find some more info.

Kimber - I love that people find my posts nearly two years after I write them. Thanks.