We drove to a little town called Lutry this past Friday because Mrs. TBF had a retirement party to go to (spouses weren't invited!). Lutry is located right on Lac Léman between Vevey and Lausanne; about two hours from Basel. Although Mrs. TBF could have taken the train by herself, I told her I wanted to go along, and that I'd drive, because...well...I pretty much look for any excuse to head to the French-speaking party of Switzerland.

Unfortunately, I can't really find anything too exciting to write about. Mrs. TBF and her colleagues left for the retirement party about five minutes after we arrived at our hotel. So, I had a few hours to kill on my own. 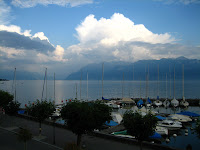 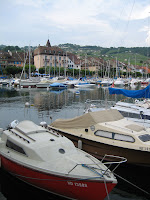 First, I walked along the lake front for about half an hour taking in the beautiful scenery. Then, I spent about ten minutes walking along the winding streets in the old part of town. After forty minutes, I figured that I'd burned off enough calories, so I decided to head back to the hotel for some din-din.

I'm proud to say that I managed to get along at dinner without speaking any English. Now, I think I speak what might be the worst French in the world, but I did manage to convey to the hostess that I wanted to eat dinner outdoors, and...amazingly...she sat me at a table on the patio. I ordered a large beer, and...I got a large beer. Since that had been so easy, I even ordered another one. I ordered dinner, and...the waitress brought what I ordered. I asked for salt and pepper, and...I got salt and pepper. She even brought the check when I asked for it.

When it came time to pay the bill, I wanted to tell the waitress to round up the bill to seventy, but I couldn't remember how to say seventy in French. So, I just gave her a 100-franc note, and asked for her to give me 30 francs in change.

I guess my year of French lessons at Berlitz wasn't a total waste! Mercy buckets!

Despite that fact that I dined alone, I still managed to have an enjoyable time listening to and watching the locals enjoying their Friday evenings with their spouses/significant others/families. The French-speaking Swiss (some of them might have actually been French...not sure!) certainly are a livelier bunch than the German-speaking Swiss. I think it's the joie de vivre thing.

After dinner, I went back up to the room to read my Rolling Stone magazine while listening to the iPod. That lasted for all of about five minutes before the magazine fell to the floor simultaneously with my first snore. A little before midnight, there was a knock at the door, and I got up to let in the lady in the French maid uniform that I had ordered from the escort service...

...just checking to see if you were paying attention to this boring post!

I let Mrs. TBF (unfortunately, sans uniform) in, and we went to sleep.

The next morning, we had breakfast with some of Mrs. TBF's colleagues, and then we were on the road, heading back to Basel, by 9:15...

Yeah, I've found the French-speaking-swiss I've met to be pretty social as well. I was in a Swiss-German class with a few of them, and even got invited to join them for a drink after the last class. My french was good enough that we chatted a bit in a combination of English, French and German. The French-speaking-swiss are much more accessible language-wise though than the German-speaking ones. We hang out with plenty of German-speaking-swiss and they're pretty entertaining, but only if you understand that stuff they speak that they call a 'language'. ;-)

Here's another excuse to cross the Roesti-ditch: Ste. Ursanne, which is a beautiful little village in Jura, and it's even less than an hour's drive from Basel.

Yes, the French speaking community certainly has a certain joie de vivre that others don't. You really should visit St-Ursanne, tough. Small, but very cute.

Now you've asked if we sleep, yes yes.. But I am loosing my french from lack of use in Vancouver..

I do love the french speaking region as well. I think that is why I fell in love with Montreux and the entire lake. We used to love going to Lutry in fact.

Funny that you mention Lutry, I actually was there a few weeks ago with my mom! =)