We've been busy travelers over the past month. So busy, in fact, that blogging has definitely taken a back seat.

After finding out that my mom and dad had come down with pneumonia in early May, I booked a Basel to Chicago (via London) ticket to visit them. Why Chicago? Well, because my sister lives there, and we decided to drive up together (with the two youngest kids) to Sudbury, Ontario (where my parents live for half of the year). 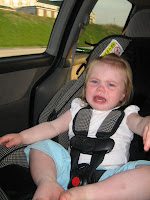 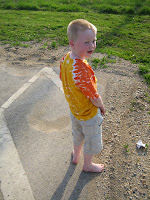 I have to admit that the beginning of the drive was a bit rough. My 19-month old niece would randomly shriek at eardrum-splitting volume, my little nephew had to pee three times within the first ninety minutes or so, and I was fairly jet-lagged.

Eventually things settled down a bit, my "never again!" thoughts subsided, and we ended up making the drive through the night in about fourteen hours; arriving in Sudbury at around 7:30 a.m. 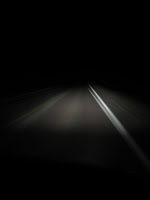 We stopped occasionally to eat, use the bathroom, and fill up the tank with cheap American gas. Otherwise, most of the trip (especially through the Upper Peninsula of Michigan) was a long...and lonely...road. Sometimes we'd drive for mile after mile without ever seeing another car; just the eyes of deer reflecting in our headlights along the side of the road.

My nephew did a good job of keeping me awake during the trip by asking me no less than 18,597 questions in rapid succession. He'd nap for thirty minutes, and then the questions would start...

"Uncle [TBF]? Do you think there are bears in this forest? Could you kill a bear? With your bare hands? Have you ever killed an animal? Who would win a fight between a bear and a moose? Could Uncle Elmer kill a bear with his bare hands? If the smartest man in the world fought against the strongest man in the world, who would win the fight? Do any people live underground?"...

On and on...mile after mile. 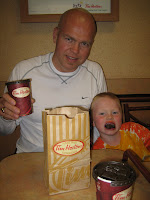 Around 5:30 a.m., when even the nephew's questions could barely keep us awake, we saw the Blind River, Ontario Tim Horton's (Canada's version of Dunkin' Donuts) in the distance. After a coffee and a couple of donuts (and sleepily trying to pay for it all with British Sterling which looks a lot like Canadian money), we were ready for the final part of the drive.

We arrived, as I said before, at about 7:30 a.m., and we spent the weekend visiting my dad and going to see my mom at the hospital. I'm not going to get into all the details, but I'll just say that I've spoken with my mom a couple of times over the past two days, and she's really doing well now. She's still feeling a little weak, but that's to be expected seeing how sick she was. I have nothing but good things to say about the care she received. As far as I'm concerned, the Canadian national health care system worked like a charm.

On Monday around noon, it was time to head back to Chicago. It was a short trip, but a good one. The drive back was a lot easier, even though I had to answer about 20,000 more of my nephew's questions.

Three weeks from today, I'll be making the drive all over again. This time, however, I'll be doing it alone since my sister and her family are going to be driving up to visit my parents this weekend. When I make the drive in three weeks, instead of driving through the night, I'm going to just go to sleep early on the day I arrive, and then I'm going to try to leave Chicago around 4:00 a.m. I'm thinking that I'll have a better chance of not falling asleep at the wheel. 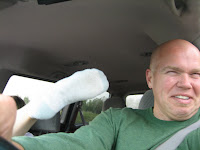 Email ThisBlogThis!Share to TwitterShare to FacebookShare to Pinterest
Labels: adjusting to being around kids, driving through the night, jet lag, my sister's smelly feet, the U.P., Tim Horton's

Maybe she can send you a pair of sweaty socks. Or then a CD of your nephew asking questions...You know... just to make sure. :)

CS - Ummm...I'll take a pass. The scenery, some CDs, and the radio should do the trick.

just to tell yall...
the drive is pure torture