Soon They'll Come Crawling On Their Hands And Knees!

According to swissinfo: "The future of Switzerland's favorite sausage (Cervelat) is hanging on, quite literally, but the skin of its teeth after an import ban of a key ingredient from Brazil." Yup...turns out that Switzerland has joined the EU in banning certain Brazilian beef products. Unfortunately, one of these ingredients (Brazilian cow intestines) is a critical ingredient for the Cervelat's skin. How critical? According to what I read, the sausage manufacturers have yet to find anything...ANYTHING...that works as well as Brazilian cow intestines, or, for that matter, even works at all.

Quite frankly, I don't know what the big deal is. In my opinion Cervelats aren't really that great, but...whatever! It's like my old neighbor Dr. John (I've known two Dr. Johns in Switzerland. What are the odds?) said a few years back:

"For a country that eats a lot of sausage...Switzerland sure doesn't know how to make very good sausage!"

The existing stock of this sausage will apparently run out by September unless an alternate ingredient for Cervelat's skin is found. But hey...no need to worry! 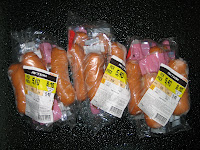 Guess who just happens to be stocking up on this sausage? That's right! TBF's Cervelats will be opening for business on October 1st! I'll be pulling the Weber out onto the sidewalk in front of the apartment, and I'll be selling grilled sausages for CHF 20 a pop!

Maybe I'll give a few out for free, and...then see who comes back for more. You know how that sort of thing works!

In October, the price doubles to CHF 40 per sausage. Then...

Email ThisBlogThis!Share to TwitterShare to FacebookShare to Pinterest
Labels: eating my profits, feeding the Swiss monkey, stocking up, Swiss weenies

I mean...Portillo's *somehow* manages to make a perfectly mind-blowing sausage without the use of Brazilian body parts.

Or maybe I just ain't got no class.

In any event, I suppose that Cervelats made with illegally smuggled Brazilian contraband will be even better than the stuff in your freezer today. You know what they say: Nothing tastes as sweet as forbidden fruit.

Or in this case, forbidden bovine intestines.

Sal (whose own tripe is "Made in the USA")