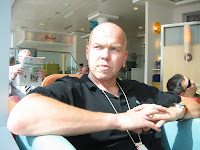 Greetings from the Holideck Lounge at Heathrow. Mrs. TBF is sleeping soundly (hopefully!) in Atlanta after a long delay at Newark Airport while I sit here at Heathrow blowing the diet (a few bags of "crisps", one latte, one cappucino, one diet coke, one flapjack, and...yes...one London Pride...at 10:30 a.m. local time!).

If all goes as planned, I should leave for Chicago at 12:55 p.m., and I'll arrive in Chicago at 3:15 p.m. Worried? Na! However, I did notice that the earlier flight to Chicago was delayed by 45 minutes.

I guess that means I'll have time for another morning pint!

Email ThisBlogThis!Share to TwitterShare to FacebookShare to Pinterest
Labels: drinking in the morning, Heathrow, wake-up calls

Are you coming to the Gay Pride Parade on Sunday? You should, there'll be a lot of topless lesbians there.

So back in NA? Just wanted to give ya a shout and tell you that the Roger Waters concert was awesome...

Don't you guys ever stay put for more than two weeks in a row??

Mrs. TBF, you have just been taged. Hey, I just want to keep you account active ;)

CS - I'm about to explain "tagging" to Mrs. TBF. Perhaps she will comply...