From The "Small World" File...

We ate at Charlie Trotter's last night. It was really, really good. But, it wasn't the best meal I have ever eaten in my life - although it WAS the most expensive! But, what the heck? Our 18-year wedding anniversary is coming up, and we decided to splurge a bit.
We opted for the 8-course "Grand Menu" with the accompanying "Wine Menu" which matched up a different wine to each course. Some of the highlights: Big Eye Tuna with Bok Choy, Young Coconut & Prince Edward Island Mussels; Bison Tenderloin with Brussels Sprouts, Black Eyed Peas & Chanterelle Mushrooms; Arkansas Rabbit with Braised Escarole, Pearl Barley & Thyme Infused Consomme.
My friend Dave told me that I would leave the restaurant hungry, but I was absolutely stuffed. Maybe it's because I've "drawn up my stomach" (as Mrs. TBF says) since I started my Weight Watchers diet on September 5th (OK...cat's out of the bag. I lost 15 lbs. the first month!).
So, here's the "small world" portion of the evening. Our main waiter's (I think we had about eight different people waiting on us.) mother comes from Basel, and the waiter's been to Basel about ten times. It was an unbelievable coincidence! 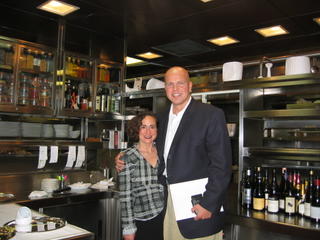 After the meal, he asked us if we'd like to see the kitchen. Of course we said yes. Afterall, we are cooking/restaurant geeks. It was about 11:00 p.m. at this point, so they were already cleaning up. We were very impressed to find out that they completely scrub down and power wash the entire kitchen every night. I mean there were guys scrubbing the vent hoods. 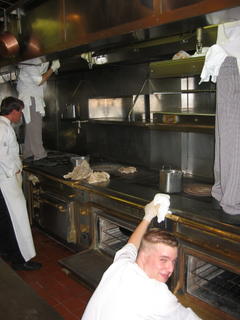 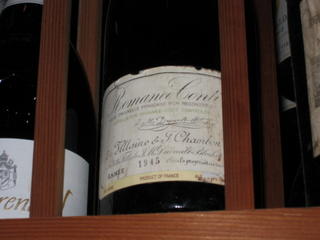 As far as I'm concerned, the restaurant tour kind of "made it" for me. TBF's rating for Charlie Trotter's?

I wondered when the Weight Watchers effort was going to become public! Congrats on the 15 lbs-- that's impressive!

Gretchen...
Thanks. I was actually down 17 lbs. right before I left. However, since I was sick right before we left for Chicago, I'm not counting two of the pounds. Plus, I'm sure I'll gain a couple of pounds while we're in Chicago.