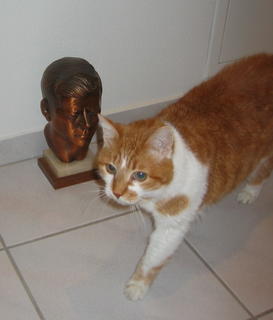 "What da Hell is dis ting???" That's what King said (Bob is having a seizure right now!) when we arrived at our home on Sunday evening and placed the Kennedy head (probably the most highly-prized acquisition from our trip to Chicago) on the floor for his review.
The Kennedy head is about forty years old. Mrs. TBF's parents had a liquor store on Grand and Menard in Chicago for many years, and they sold these Kennedy heads in their store in the mid-60s.
When I was in Chicago this past spring, I noticed the Kennedy head collecting dust in Jo's closet, and I asked her if I could have it. Unfortunately, my suitcases were too heavy and I had to leave it behind. But, this time I was able to fit it into a carryon bag. Let me tell you, it was a big hit going through the x-ray machine at O'Hare. The lady at the x-ray monitor called over her co-workers, and the had a good laugh about it.
I'm happy to report that "the head" made it safely to Basel, and now it has a place of honor on a shelf in our T.V. room.
The Chicago chapter is now officially closed! Whew!
Posted by The Big Finn at 10/18/2005 04:15:00 AM

Too funny. The strangest thing I ever traveled with as carry-on luggage was a fully stocked tool box. This was obviously pre-9/11. It was 1994, I think, and I had just moved into my new apartment in Washington. Can you imagine flying these days with the contents of a tool box? Hammers, screwdrivers, nails, even an exacto knife... my how things have changed. The guys at security didn't know what to think when it went through the x-ray machine. All I had to say was "It's a Christmas present from my Dad", and they just smiled. A couple years later my Dad actually brought me a small duffle bag filled with kindling (firewood) from Wisconsin as carry-on. I guess he thought the Washington wood wasn't good enough.

I have to say, that the expression on King's face says it all.