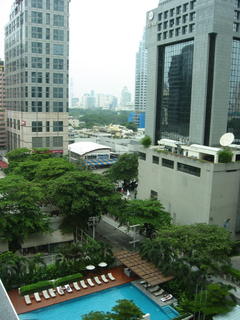 We eventually ventured out of our hotel (Here's the view from our window.) on Sunday to check out some of the sights. Bangkok doesn't really have a city center, and there aren't too many landmark tourist sights so we settled on going to see a place called Wat Pho. 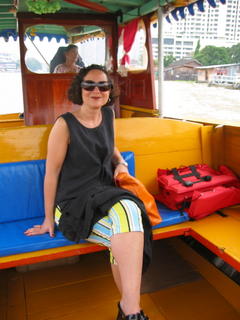 The taxi driver was supposed to take us to some public dock where we were to catch a boat to Wat Pho. Instead, he obviously took us to his buddy's little boat dock where we ended up paying some ridiculous "rich American" fee for a private boat. The price was ridiculous by Thai standards, but it wasn't too bad by Western standards. 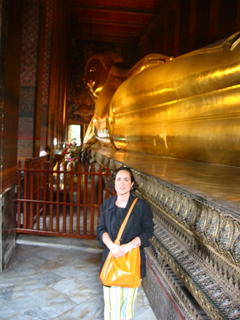 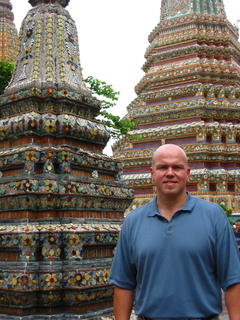 Wat Pho ended up being a pretty impressive place. I would have said "cool", but it was anything but. It was downright steamy! We saw unusual things like the enormous reclining buddha which was completely covered in gold leaf. Of course the guidebook says you're not supposed to take pictures with both buddha statues and people in the same picture. But...everybody else was doing it so I figured "what the heck"! There were a lot of crazy looking temples and odd cone-shaped structures which managed to actually keep my interest for about forty-five minutes until I noticed that I was sweating through my undershirt and polo shirt (it's pretty much 33˚C and humid here every single day).
Incidentally, in the continuing saga of me running into Finns throughout the world, I heard Finnish being spoken all around Wat Pho. There must have been a tour bus full of Finns there. AND...I ended up doing Thai/English to Finnish translation.
There were three Finns standing right next to me. Before I even heard them speaking Finnish, I thought they looked Finnish, and like me, they were sweating through their shirts. A Wat Pho employee came up to them and said something to them in Thai - the Finns just stared at him. Then, he said "...you must pay!" One of the Finnish men responded (in Finnish): "...but we haven't gone into anything yet!" So, TBF steps in to save the day. I told the men (in Finnish) that "...it is necessary to pay immediately when you walk into the Wat Pho grounds." They thanked me, and then kind of gave me one of those "who the heck is this guy?" kind of looks. 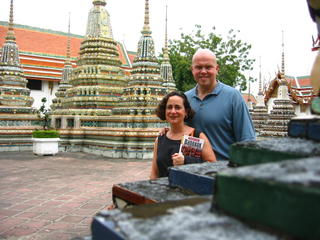 I took a couple more pictures, including a self-portait, and then left for the Royal Grand Palace. At the RGP, we found out that Mrs. TBF was going to have to rent a wrap and shoes in order to go in. So, we took a pass. Besides, I told Mrs. TBF that I could feel my legs sweating under my pants. It was definitely time to head back to the arctic chill of our hotel's air conditioning and resume the "debate" over the room's thermostat setting.
Posted by The Big Finn at 10/25/2005 04:30:00 AM