We've already been back in Basel for a couple of days now. However, I thought I'd post a few more pictures from Chicago. 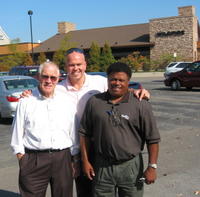 This is me with a couple of my old work buddies - Ed (left) and Dave (right) after we had a nice "meaty" lunch at Wildfire. One time in the office, we were horsing around, and I managed (in a five-second burst of energy) to tear Ed's rotator cuff AND send Dave crashing into the wall with a nasty "Big Finn" stiff-arm. Of course, I was about forty pounds heavier back then. 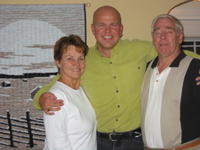 Here's a picture of me with my parents - Kirsti and Leino. As you can see, I'm quite a bit taller than they are. I guess you could say that I'm an example of what happens when you eat U.S. beef injected with growth hormones your entire life.
By the way, my mom's birthday was a couple of days ago (October 16th - of course I called her!). My dad's 70th birthday is this December - of course I've already booked a return trip to Chicago for December to celebrate that milestone! 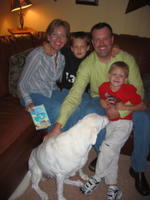 We went out for a nice Mexican dinner with Bob and Jackie at one of my old haunts - Taqueria Fiesta - on Friday night. Here's a picture of them with their sons Marty and Brian, and their dog Zoe.
Bob admitted to me that he HATES (I think he actually said it makes him cringe and shake with fury!) when I write on The Big Finn's Big Blog about how our cat King's "voice" has a heavy Chicago accent and that he has businesses all over the world. Look for a lot more from King in the future! 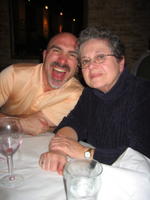 Finally, a picture of Perry and Jo. Perry (with the same expression that he has in just about every picture I've ever taken of him) turned fifty in September, and Jo turned seventy-five yesterday! Perry was four, and Jo was twenty-nine, the last time the White Sox went to the World Series (that means nothing to the Europeans reading this blog). DAMN!!!
Posted by The Big Finn at 10/18/2005 04:00:00 AM

I am shaking with fury as I read this....

I have always imagined King as Garfield. Not really interested in anything but his next meal.

It was a great trip and we are so glad we got to see you even if I did experience extreme gastric upset during our meal.

You've got your Mom's smile.