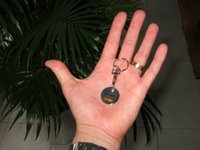 Imagine my surprise this past Monday when, while shopping at my semi-friendly local Coop, I was handed a gratis token of appreciation for frequenting this textbook example of oligopoly (See? I took economics in college!). Suuuuure it only costs a couple of cents, but it's the thought that counts...right?
What is it, you ask? It's a chip that you insert into your grocery cart. Normally, you have to put a two franc coin into the cart to unlock it from the next cart in line. Then, after you're done shopping and return your cart to the little shopping cart "grotto", you get your two francs back. Pretty neat, huh? So now, instead of having to remember to have a two franc coin in my pocket when I go grocery shopping, now I only have to remember to carry this little "chip" with me.
Now, for you people who do not live in Switzerland, this might seem like it's not that big a deal. But, for us Swiss residents, this random act of kindness is something to write home about. You see, the Swiss don't really like to hand things out for free. Case in point...
Back in 2000, when we first moved here, I went to IKEA to buy a bed for our guest room. I hated these trips to IKEA! I had to try to find somebody who spoke English, I'd have to load all this crap into the car, the stuff's made like shit and you're always worried about chipping it, then I'd have to unload the stuff and carry it up a zillion stairs, assemble it, get rid of mountains of cardboard... Well, you get the picture. So, I buy this guest bed, assemble it, carry the mattress up to our top floor guest room, and...the mattress was the wrong size!!! They gave me the wrong mattress!! Scheisse!!! I ended up lugging this Swedish piece of crap back to IKEA and getting the proper size mattress so I could do the whole process all over again.
So, being fresh "off the boat", so to speak, from America, I did a bit of polite complaining. Now, I get the feeling that the Swiss don't take confrontation too well. I relayed my ordeal to two IKEA customer-service fraus, they delved into a rather muffled conversation in Swiss-German, and then the one lady kind of cocked her head toward a little cabinet. The other lady took out a key, unlocked the door, took out a little metal box, unlocked that box with another key, and took out a little piece of paper. After locking everything back up, the lady came back to me and handed me the piece of paper. "Zat iz fir zee inconvenienze!" I looked down at my palm, and there was a piece of paper that entitled me to...now, are you ready for this???? A free cup of coffee at the IKEA restaurant!!!
The entire way home, I kind of chuckled thinking about what would have happened if this series of events had taken place at the Schaumburg, Illinois IKEA. I'm thinking that complaining would have resulted in...oh...50% off the cost of the bed, or something of that ilk. When I eventually made it home, I told my neighbor Paul about my ordeal. His response? "You got something for free from the Swiss? You must be one hell of a negotiator!"
So, roll the film ahead to January, 2006. The Coop cashier hands me a gratis shopping cart chip, and you better believe that it's a big deal. Afterall, it's not everyday that you get something for free in Switzerland. Actually, it's more like once every five years.
I guess that means I shouldn't expect another gratis thing until about 2010 or so.
Posted by The Big Finn at 1/18/2006 02:52:00 AM

I freakin' love my shopping trolley token. I got mine free from Carrefour when I asked the dude at the recycling desk for some "wechselgeld". I thought it was Christmas!

Well... Those tokens look like a wonderful idea. Almost All carts in Canada you have to put the money in also. It's really inconvenient remembering to hang on to that extra looney. I'm wishing that would happen here but somehow I doubt it. People would abuse the system.

Well shopping carts in Chicago are still free, but most of them have added a security device to the front wheel that makes it inoperable if you attempt to leave the parking lot. Here's a of one.

Too funny that they had the coupons locked up in a box, I bet it had a serial number on it as well so they could track their effectivness.

I'm so excited! The cashier at Coop gave me one of those the other day and I just threw it in my purse and hadn't looked at it again. Now I know what it is (I think I thought it was a keychain at first glance) and am looking forward to using it. What a nice gift from my neighborhood Coop!

At the ALDI stores in the Chicago area you have to put a quarter into the slot, which then removes the chain that locks your cart to all the other carts. When you're done shopping, you get the quarter back when you return your cart and chain it back to the others. You also have to do your own bagging/boxing of groceries -- there are no frills at the ALDI, which helps to keep their prices down!

Renee...
Thanks for the infomercial. By the way, did you know that ALDI is a GERMAN grocery store chain?
I hope you're not shopping for groceries at ALDI before we come over for dinner!
Love,
Your Dear Bro-in-law...TBF