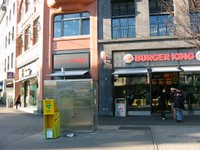 Here are some signs I saw in Basel's sunny Bahnhofplatz this past Friday afternoon. Of course, there's what I call the "corner of sin"! And, naturally, I passed this corner right after working out when I was totally running on empty. But I'm happy to report that I didn't negate the benefits of a good workout by being sucked into the Home of the Whopper - Burger King.
Basel's first BK has been open for a couple of months now, and I have yet to pass into the lair of flame-broiled transcendence. Maybe I'll go after I hit my goal weight.
I also skipped the Davidoff cigar shop (...currently 24 cigars in my humidor) and the German version of Starbucks - Tchibo (...had to pee!). Maybe I'll hit the "corner of sin" some lazy afternoon when it's a bit warmer outside. 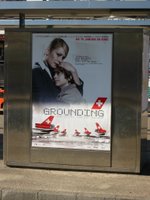 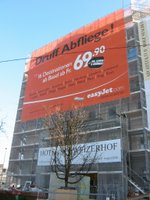 While waiting for the tram, I noticed these rather appropriate signs o' the times... The first picture (sorry about the lighting...it was really sunny and the lighting was playing tricks on me) is of an ad for a Swiss movie about "...the final days of Swissair". The old Swissair was your classic airline that tried to grow too quickly, refused to recognize changing industry/market trends around them, stopped listening to what customers wanted, were seduced by delusions of grandeur, etc., etc., blah, blah, blaaaaahhhh! They went out of business in 2001, much to the humiliation of the Swiss (Dear Swiss: LET IT GO!!! It happened almost five years ago. MOVE ON!).
After taking the picture of the Grounding sign (Does anybody know whether or not this film has English subtitles? I'd kind of like to see it, but there's no way I'm sitting through two-hours of Swiss-German without English subtitles), I made a 180˚ turn and saw this enormous "scaffolding-ad" for EasyJet.
You know, EasyJet - a low-cost airline that has grown quickly because it has recognized changing industry/market trends, given customers what they want, etc.
Posted by The Big Finn at 1/23/2006 05:15:00 AM

The majority of the Swiss definitely do NOT like change! As for the subtitling of the Grounding, I'd be surprised, but I can check. BTW: I just realized that we haven't been to BK in Basel since it opened! Shame on us!!!

Nope - No subtitles at all.

I find that really strange. How much would it cost to add subtitles? Doesn't it make sense to increase the potential market for your film? It was just a thought!
Oh well, maybe I'll just save the money by not going to the movie and just fly to Paris, Nice, or Berlin (or one of the other 13 places EasyJet flys to)!

There's another Swiss movie I'd love to see called Achtung Fertig Charlie. It's supposed to be a comedy about Swiss Military Service but I just know without English Subtitles it the Swiss German will just go way over my head. Shame really!

I've been to Burger King and am not ashamed to admit that it was fabulous!

Haha - I seem to space out on the fast food joints here in Vancouver. They are really hard for me to find these days. Must be my stay in Switzerland that did it!

I saw an article in Swiss Info about 1 wk ago on Swissair. But I'd agree, wouldn't see it unless it has subtitles. Check in Biel - maybe they are different, but then again that's 1.5 hrs train ride each way..

Hi TBF, about Easyjet, imagine this: my sister and brother in law booked a weekend flight, Amsterdam - Basel and back. Total cost: € 131. Now we have cecked what iw ould cost to fly in opposite direction, with Easyjet, Basel - Amsterdam and back. Guess what??? From Basel to Amsterdam and back cost € 100 more!! The ultimate proof that Switzerland is far more expensive than other Euopean countries.

Since I work really close to the Burger King, I can verify that it is absolutely PACKED with every high school student in Basel at lunchtime.

i never thought about the subtitles because usually i see the subtitles in French... hmmm...i want to see Achtung Fertig Charlie too, but my German is so...how do you say, nonexistent. :( Oh well, Underage Underpaid German Teacher will change that, I hope.

Note to Gretchen - Have you heard of the white castle breakfast casserole made with chopped up sliders soaked in eggs & milk and baked in the oven to a glorious evil bread puddingish thing? I'm thinking it would work well with whoppers if you ordered them without the lettuce and mayo!

Mrs TBF: Are you kidding me??

No - I'm totally serious! I know it seems the thought seems to fly in the face of my normal culinary inclinations...but sometimes you have to go nuts!