I weighed in at 100.8 kilos, or 222 lbs., last Friday (my weigh-in day). This means that I've lost a total of 28 lbs., or as the Brits say..."two stone." Now, I know I'm probably going to get some flack about this one, but I'm just going to go ahead and say it... "Stone" (14 lbs.) has to be one of the dumbest things I've ever heard. If I say 222 lbs. to a Brit, there's usually about a 30 second pause in the conversation while that person converts it to stone. By the way, 222 lbs. is 15 stone 12 pounds. I've gone on record saying that I feel the whole world should be on the metric system, and I have to give the Brits credit for making a half-assed attempt to convert. But, they refuse to let go of that "bloody" stone thing. It must end...NOW!
For the record, in addition to stone being a stupid form of measurement, I also disagree with Europeans calling the ground floor zero instead of the first floor. You walk into a building, look down, and the floor you see is the first floor you see. First floor...I'm right, you're wrong...no argument. There should be no floor zero in a building, elevator, etc. NEXT!!!
I think it's better to write the date as January 18, 2006 instead of 18 January 2006. I don't think the latter is dumb, but I do think that the former is better. Here's why: If a person was only able to say the first word....ok...let's say a person dies after telling you the first word of the date. If this were the scenario, the North American would dress appropriately for the weather, and the Brit would not. "January..." (person croaks...) The American/Canadian is putting on a winter coat. "Eighteen..." (person croaks...) There's a good chance that the Brit is walking outdoors unprepared for the elements. So I guess the choice is yours - be all nice and toasty, or catch pneumonia. For me, it's a no brainer!
Well then! I feel better. Now...getting back to where I was originally going with this blog entry. 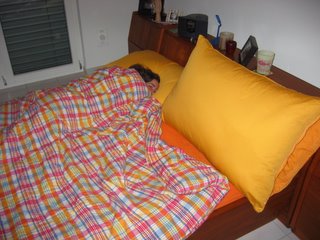 One way of looking thinner is to lose weight. Another way, and probably the easier way, is to surround yourself with big things. This, too, can create a slimming effect. Take, for example, the new pillows I bought yesterday afternoon. Our old pillows were getting a bit old and lumpy, so yours truly jumped into action and rode the tram to Manor. Ok..ok...Mrs. TBF actually said something like, "...when are you going to buy those new pillows?", and I trudged through the drizzle to the tram stop, and rode a couple of trams to the hell that is a January sale at Manor. But, "jumped into action" sounds so much better, doesn't it? While at Manor, I noticed the crazed mob rummaging through linens at the discount table. I took a quick peek, noticed that these linens were discounted for a reason (most looked like a cross between leopard print and a Scottish kilt), and then I went right to the full-price section so that I could shop in peace. I picked out a couple of sets of pillow cases, and two of the largest pillows I have ever seen. They measure out at 65 cm x 100 cm. That's one meter wide (over a yard wide to yous guyses in Chicago!)!!!
Look at Mrs. TBF in this picture. She pretty much disappears under our nice flannel duvet while the enormous pillow envelops her tiny head. Hell! That pillow even makes my immense cranium look svelte!

P.S. Please note the plastic cup of water on the headboard above my pillow. That is not drinking water for me. That is King's drinking water. It used to be mine. That was, until King began using it, and claimed it as his very own, a couple of years ago. Now, I have to keep a full cup of water on the headboard just for him. Most mornings (usually around 5:30 a.m.), he climbs over me onto the headboard and slurps water just above my head for what seems like an eternity.
Posted by The Big Finn at 1/18/2006 04:45:00 AM

I'm sorry Mr Finn but I can't do the pounds thing - there are just too many of them...I am more to be pitied than scorned. But well done on losing 28 thingies.....whatever they are.

*Shakes head and smiles in the condescending manner that Brits do*

Great job for loosing the weight. I know it must feel better for exercising. And the conversions, I agree with your arguements, but since most of the world doesn't think that way, I had being a minority for it.

The pillows - I love em. I wish I could find ones like that here in Canada. I like larger ones not smaller pillows.

I'd be happy to say I weigh 14 stone, it sounds so much better!

Those are the BIGGEST pillows I have ever seen in my life!

I saw your link on the "Just Call Me Mausi" blog. Whenever I see the word "Finn," I perk up. Why? Because I work with many, many Finns. My employer has a large subsidiary in Finland.

I like Finns. They seem quiet and reserved, but that ends immediately after you leave the office and step onto a Helsinki sidewalk. Finns are, in fact, a blast to hang out with.

Anyway...enough of my rambling. I just wanted to say "Hello" on my maiden voyage into TBFBB.

Kiitos!
Sal (US expat in Spain)

Wow, that's a BIG pillow! Make sure you leave some room in the bed for Mrs. TBF!

I have an English friend who's always talking in stone and I'm going "Huuuuuh?" I mean, I know it's 14 lbs, but who can do the math that fast? Not me for sure.