That was me counting sheep last night. I don't what the hell happened, but I was awake last night from about 2:00 a.m. jusqu'a (just had a French lesson) about 6:30 a.m. Why? No idea!
We went out to the Bottmingermühle (about a one-minute walk from our apartment) for dinner last night. Mrs. TBF was invited to go out with several of her work colleagues (including our neighbor Suzanne). Mrs. TBF and Suzanne, in turn, invited me and Corey (Suzanne's husband) to join the group. Originally, we were going to sit at a separate table and just "spy" on the gals, but the "Mule" was hoppin' and we ended up having to sit at the same table with the gals.
Corey and I sat at one end of the table keeping to ourselves with an "invisible wall" between us and the ladies, but eventually we ended up joining in the conversation with the rest of the table and had a pretty good time. The "Mule" isn't anything fancy - just your typical Swiss menu with sausages, rösti, entrecote, wiener schnitzel, etc. - but it is the local "joint", and we like to get over there every now and then. So after dinner, we came home and relaxed a bit, went to bed, and I fell asleep watching "Viva la Bam". At 2:05 a.m., I woke up in my clothes with the lights and T.V. still on, and I went into the bathroom to get ready for bed.
...zip ahead to about 3:15 a.m., and there I was...still wide awake. I grabbed the iPod, listened to three albums, and...nothing. At 6:30 a.m., Mrs. TBF's clock radio alarm went off, I told her that I hadn't slept for several hours, and then...I began to nod off. I remember hearing a couple of traffic noises from outside, and then the next thing I remember was Mrs. TBF leaving for work and telling me that she was going to let me sleep in.
I ended up waking up at about 9:55 a.m. The phone rang a couple of minutes later. It was Mrs. TBF calling me so that I wouldn't sleep in too late. I told her I'd meet her in town during lunch at this store called Merkur which was having a sale, and Mrs. TBF wanted to buy another winter coat. I was there to give her my opinion on which coat to buy, and then I was also given the task of bringing it back home so that she wouldn't have to lug it back to work. 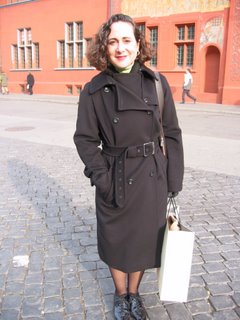 Here she is in Basel's Marktplatz after buying her new camelhair overcoat. A couple of seconds later, the handoff was made. She went back to work, and I ran a couple of errands before heading back home. A short, but sweet, mid-day rendezvous.
Posted by The Big Finn at 1/12/2006 05:00:00 PM

ah yes by the background I could even recognize it was marktplatz. How I miss Basel so much. There are so many cool shops, so many nice places to go out to eat or just hang out for a drink... North Vancouver isn't all that bad, but it's not like Basel for sure...

Nice coat Mrs. TBF. Congrats and enjoy it while the cold is here - might want to exchange it for a raincoat soon, if the weather follows the past years' trend