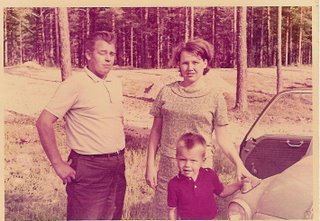 We're going WAAAAAAY back for this week's Friday Flashback - back to 1966, to be exact.

This picture was taken during a family summer vacation in Finland. My dad, sporting an Elvis-like hairdo, is doing the typical not-looking-at-the-camera picture pose that Finns tend to do. Why didn't I end up with hair like that??? I think I was already balding in this picture!

Speaking of hair, I know my mom is not going to be happy that I posted this picture because of the (shall we say?) frazzled look of her hair. However, we have to cut her some slack because she was about four-months pregnant with my sister in this picture and had probably been napping in the car with the window open when my dad decided that a photo stop was necessary.

There are many unknowns: I don't know who took the picture, I don't know exactly where the picture was taken, and I don't know from whom we borrowed the car (are those "suicide" doors?). What I do know is that I was a couple of months shy of four-years-old, and I was already over half my father's height (5'11"/180 cm) and two-thirds of my mother's height (she's 5'7"/170 cm). Look at the size of my head as compared to my skinny body for God's sake. It's amazing that I was able to walk in an upright position.

I just happened upon this picture this past week while looking through a box of random photos. I'm not really sure why I have this old photo (most of the old photos are at my parents' house), but it was a timely discovery because it celebrates the fact that my parents will be arriving in Basel on Tuesday for a two-week stay. They haven't been here since February, 2003.

That's a great picture! Have you ever seen "So I married an Axe Murderer?" the scene about the Huuuge head in there is pretty funny, and this reminded me of that. It's a really fun movie, dark humor.

I've been quietly reading about your adventures, as there isn't much new going on with me. Hubby got his fellowship application submitted, but it'll be about 4-6 mos before we hear anything! Ick, I hate waiting!

Beej - "like an orange on a toothpick"! I can't believe somebody picked up on the vague S.I.M.A.A.M. reference. Our personal favorite is the Phil Hartmann tour-of-Alcatraz scene. He should have won an academy award for that one. I still can't believe he's gone - what a waste!

That picture was on your refrigerator in your South Barrington home. I am guessing you have it because while getting ready to move, you removed all pix from the fridge and tossed them in a moving box.

I have a theory that the size of your head has a direct correlation to the shape your knees are in.

I miss the pictures on your refrigerator. Oh and I miss you too.

You look like you turned your upper body on that pict, so it can't be that bad TBF. LOL. It also looks like you're saying something to the photographer like "Hey, who are you?"

Why don't you go cry yourself to sleep on your enormous pillow!

So you're saying there never really was a Little Finn?

You dad totally looks like he could be a member of the Leningrad Cowboys. Nice hair! We should all be so lucky.

"ehh" old neighbor here again...as posted on your 10/06/2006 writeup, you really do need to be writing some books!!!! Travel book, Restaurant book, Adventure book and a Life book (how to enjoy every minute of an expat life)!!!! Give some leasons maybe!!!!! Most excellant reads TBF..keep up the great writings!!!!

Which old neighbor are you? Give me a hint...

EHH!!! Does that give you a hint? From somewhere not to far north of your home country ehh!!!

EHH - Sorry, you must have me confused with somebody else. I don't know anybody with the initials EHH. Plus, there's nothing north of my home country - Canada. Oh...wait a minute...Santa Clause...is it really you?

TBF: EHH is a word not initials!!!!
You got half right with Canada ehh!!!

TBF: sorry forgot to add we were neighbors in Swissyland before you and Mrs.TBF dumped us like hot potato's for all the guitar noise!!!!!!!!!