Prague: We Have Returned...

We arrived in Prague early on Friday afternoon. During our flight, I proposed a little competition: Who would be the first person to smell garlic breath/B.O.?

The last time I was in Prague, I noticed that many Czechs had an overwhelming, although not totally unpleasant, odor of garlic emanating from their beings. This trip would not disappoint... We walked through Customs, saw the man holding the "Mr. & Mrs. TBF" sign, followed him to his car, and climbed in. After he climbed behind the wheel, my mom immediately said "valko sipuli". "Mitä?" (What?), I said. Mrs. TBF chimed in with a "knoblauch" (garlic in German). A split second later, the smell of garlic slapped me in the face. Mom and Mrs. TBF had won the garlic-smelling competition.

About thirty minutes later, we arrived at our hotel. The outside of the hotel was ever-so-slightly dingy. However, the inside did not disappoint. We had ordered an extra bed in our room for my mom, but the hotel had upgraded us to adjoining rooms. Nice!

Unfortunately, Mrs. TBF had a conference call for work in which she had to participate. I won't post a picture of her on her conference call. Let's just say that I'll add them to my personal collection of vacation/conference call pictures I have from Paris...Helsinki...etc... Since Mrs. TBF was going to be busy for a couple of hours, my mom and I set off on foot. 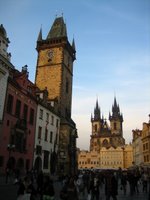 We walked to the main square in old town, checked out the fantastic sights, and then slogged on to the Charles Bridge. After a quick snack, we made our way back to the hotel. 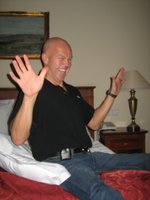 I was excited to find out, when we made it back to our room, that Mrs. TBF was done with her conference call. After enjoying our complimentary "Welcome" drinks in the bar, we made the five-minute walk to a restaurant - Restaurant Zvonice - the concierge had recommended for dinner. 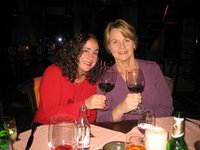 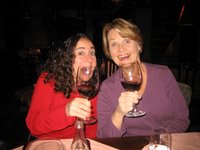 Zvonice was nice. It was on the eighth floor of a bell tower, and the restaurant itself is in the actual belfry. I snapped this picture of Mom and Mrs. TBF. Come on! You can do better than that! Look like you're having fun! That's better...
Posted by The Big Finn at 10/24/2006 07:50:00 PM

Keep on motivating the ladies TBF! We know the big smile Mrs. TBF can have. To bad she's "hiding" behind the glass... Hope you really enjoyed Prague. I've never been there but I'd like to go before hopping over to Canada.

I've always wanted to go to Prague, too. So I guess we might even do that. On the other hand, we still want to visit many friends before we leave. Decisions, decisions!!! :-)

oh man prague looks like they enjoyed you! By the way CS, I lived there in May 2002 for the month. What a great city!

I love your pics as always TBF. Funny people shots!

Every time you post pictures I notice that you and your wife's family have superior genes when it comes to aging. Everyone looks at least twenty years younger than their "real" age. Come on, tell the truth, y'all are 25 and your parents and in-laws are 50. I so found y'all out.

I agree with DP on this one. That was my reaction as well when I saw these photos-- your Mom looks amazing! I can't believe she is old enough to be your Mom.