Burning The Candle At Both Ends...

I'm in Chicago. Actually, I'm at my sister's house in Barrington, Illinois. As you can see from the time, I woke up kind of early this morning (4:40 a.m. to be exact). Since I made it last night to the end of Monday Night Football and didn't go to sleep until about 11:00 p.m., I thought I'd sleep-in a bit later than I did. I guess it wasn't to be. 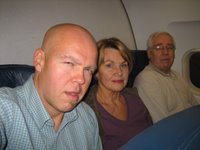 Our trip from Basel to Chicago went like clockwork. I say "our" because I flew here with my parents. Mrs. TBF dropped us all off at Basel Airport for a 7:00 a.m. flight to London, and then she went home to prepare for her own flight to Kuala Lumpur. We're pretty far apart right now, and I don't like it. 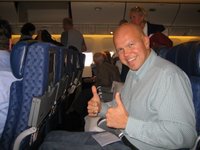 We flew American Airlines from London to Chicago. I was a little concerned while I was in the departure area; not only because I was flying in coach, but also because I was concerned that I'd be seated next to one of the many grossly overweight people that I saw waiting with me for the flight. My parents had the two seats side by side on one side of the aisle, and then I had the aisle seat across from them in the section of five seats. Fortunately, there was no need for concern because the only people in my section were me on the aisle, and an old man four seats away. I had room to stretch out, and I slept for about 90 minutes during the flight (thank you gin & tonic and French wine) - a rarity for me on a flight from Europe to the U.S. Oh...and before you go saying what a good son I am for having chosen to fly with my parents in economy class: I pretty much listened to the iPod, read, and...ignored them for most of the trip. I know...I'm a jerk!

Will we get a chance to see you while you're here?

TSK - I've just been waiting for an invitation.

I would invite you but I'm busy getting a life

well the pics do make it... And being far away isn't any fun, b ut I guess that's why Ginnie tries to travel too!

Looking forward to some picts and more about your trip to Chicago. Have fun!

You know, my brother would be the type to buy us a coach ticket then be like, "Bye" and head off to first class. I think he did that to my mom once.

Good to read you had a good flight. Hope the stay and the flight home to Basel will be smooth as well. Enjoy!

TBF. Frosts are forecast. Give me a call if you need the outside taps draining to protect against freezing. Dx.

Dx - I don't think it's necessary. I never turned them off last year (don't even know how). At one point last winter, I turned on one of the outdoor taps, and WARM water came out of it.