Since Mrs. TBF was out of town, I tagged along with Corey, Suzanne, John, and Rammy as "the fifth wheel" for the "Vega Scilia Wine & Dine" at the Restaurant Bruderholz this past Friday night.

Am I jaded, or what?

Once again, I left a restaurant (this one is considered one of the best in Basel) thinking that the food did not meet my expectations. Was it due to the fact that it was a rather large group and we were served banquet style? ...not sure. Maybe I'll need to go back with Mrs. TBF someday (it's only five minutes away from our apartment) and give the "real" menu a try. However, my first impression of this restaurant was one of mediocrity.

I did, however, have a really good time even though I was without my better half. The five of us ended up sitting at a table with a Swiss couple with whom we chatted away (fortunately, for us, in English) for hours. I had my first taste of wild (game) this fall, listened to a Spanish lady from Bodegas Vega Scilia speak in German about the various wines, watched with some amusement as a Swiss lady semi-heckled her about previous not-so-great experiences with the wine, and then proceeded to enjoy said wines (but not enough to actually buy any of them). 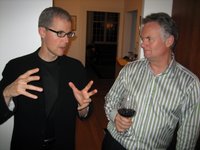 After dinner was over, the five of us made the five minute walk over to John and Rammy's house where we enjoyed more wine and - after I pointed out that I was still hungry - a bit of cheese.

At the stroke of midnight, I snapped this picture of Corey and John. Guess which one wishes to be reincarnated as an Italian man?
Posted by The Big Finn at 10/02/2006 08:45:00 AM

so did you enjoy the Vega Sicilia? here down south in Spain, it's said to be the BEST and there are waiting lists to buy a bottle. curious.

LOL - my guess the Italian man is the one standing in the doorway... LOL..