Apparently the Chicago Tribune no longer publishes the poem and this illustration called "Injun Summer" by John T. McCutcheon every year because some readers felt that it "advocated the genocide of Native Americans and other minorities..." (you can read about it here if you feel like it). WTF???? Does everything always have to be so politically correct? Sheesh!

Yes, the nights are suddenly "fresh" as the Swiss call it, local restaurants are serving wild game (I had some wild boar filet last night), we've visited the local pumpkin farm, and the leaves are changing color. Fall is definitely here!

One thing I've noticed here in Basel is a definite lack of red leaves during the fall. There's a lot of yellow and brown, some orange, but hardly any red in the local fall landscape. Maybe the reason is that one doesn't see too many maple trees around here. Who knows? However, I decided to tackle the lack of red issue by taking matters into my own hands this afternoon with a visit to the local nursery.

I knew what I was looking for, and with the help of one of the local nursery employees, I found it - Euonymus alatus (a.k.a. the Burning Bush). It was a beautiful, reasonably priced, 15-year old specimen, which was good because it was the only one they had. I went inside and paid, pulled the Jeep around to the gate, and loaded the bush into the Jeep by myself while the nursery employee stood there watching me struggle...all the while telling me what a great bush it is. Ummm...thanks for the help...wouldn't want you to get your hands dirty. 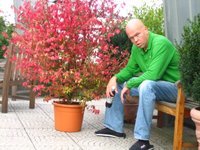 Getting it out of the Jeep was a bit of an ordeal, as was cramming it into the elevator, and carrying it up the final spiral staircase that leads to "the fishbowl". Then, I had to go back and sweep up a trail of a zillion tiny little red leaves stretching from our garage up to the roof. By the time I finally got to sit down and enjoy the stinkin' bush, I was sweating like pig!

Is there anything more American than the poem "Injun Summer?"

I used to look forward to it each year in the Trib. It reminded me of when I was a kid growing up in upstate NY's Mohawk Valley.

No! I'm not friggin' joking!

Anyway, nice bush. But I'm really here for the poem.

Thanks for having a bigger pair of cojones than the Trib.

WHAT?? No beer in your hand?? Or did you get one after the coke?

Anyway, you better start getting those wood fires going because soon, it will be winter and I'll be out of a job. So maybe I can come over for some hot chocolate (with a shot of dark rhum, please) and a chat. Then I'll go back home -eventually slightly sedated- to cook a nice meal for my hubby.

I not only remember the Injun summer poem, but it brought back the memory of my dad nailing it to his work shop wall. It was so cool and I am tired of political correctness. If we all trust and respect each other the hell with being PC.

Enough with my rant, I just really want to say again...... "NIZE BUSH! I knew you was a fire crotch!"

I noticed the same thing about the trees not changing colours in Basel when I was there last weekend. It's weird because the leaves here in Strasbourg seem to be confused also as some are changing and others aren't. There are however lots of them on the ground since we had rain a few days ago that lasted a few days and I guess the weight was too much for the poor things to stay on!

Sal - Thanks. Yes, I have been having a bit of trouble walking lately.

CS - I'm sure there will be many fire ops. Thanks for reminding me...I have to replenish my firewood supply.

TMS - No charge for the "nize bush" softball I lobbed your way. I was going to title the post "Nize Bush", but I thought I'd let you have it instead.

Oskari (sorry...can't pronounce oskyldig) - I'm looking out of the window right now, and there are still an amazing amount of green leaves on the trees. Maybe we'll have a Chicago-style fall: the leaves just change color, and then they're all knocked off in one night by a torrential rain.

No, no, no, no,no. We didn't get married in secret. Not to worry, you didn't miss a party :-) CS likes calling me her "hubby" to make clear to whom she's referring. If we get married, you'll be one of the first to know!

BTW, the bush is really awesome. I love the colour. CAn imagine how many swears came over your lips when hauling the big bitch up to the fishbowl...

how beautiful! I love the colors too, and we've got many like that here. LOL - love the hubby reference too...