My relatives from Finland were here last weekend for a three-night stay. It was a short (but activity-packed) visit, and a great opportunity for me to practice my Finnish which gets a little rusty when unused for long periods of time. I'm happy to report that my "lazy" tongue is once again in prime, Finnish "r" rolling form. 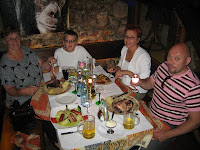 We spent the afternoon of their (my Aunt Liisa, my cousin Jaana and her son Pyry, and Jaana's husband Juha) arrival touring Basel. On Friday morning, after a good-sized breakfast, the five of us (Mrs. TBF had to work) drove up to one of my favorite towns in the Alsace - Riquewihr. Of course, we weren't really super hungry since we had finished eating breakfast only a couple of hours earlier, but that didn't stop us from wolfing down a mammoth lunch. Oh...and not too many hours after lunch, we managed to wolf down a barbecued turkey and some duck breasts.

Ahhhhh...behold the power of the Finnish appetite!!!

On Saturday, we five Finns drove down to Luzern (after another filling breakfast) and took the lifts up to the top of Pilatus. Mrs. TBF would have come along, but she...um...felt it was necessary to stay behind and do some grocery shopping. 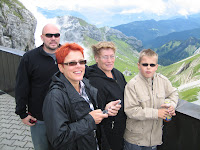 Pilatus is always a nice day-trip. It was a beautiful, warm, sunny day everywhere...except for at the very peak of Pilatus - which was chilly and shrouded in clouds. However, the fun was in the journey...as "they" say. We did manage a couple of good pictures at the summit during momentary breaks in the clouds, and then it was time to head back down and...back to Basel where Mrs. TBF had prepared yet another gut-buster of a meal.

Yes, the rolling-Rs are back, and Mrs. TBF actually mastered pronouncing Pyry's name by Sunday afternoon.

Now that I look at the pictures:

Must be that finnish blood (the resemblance)....

You know, I looked at both of the pix and said "Wow, do all Finnish men shave their heads?"

Although I do love your cousins hair color!!!!

Hey, I saw you walk by on Sunday and wondered who you were with! Now, I know.

I really like Pilatus (and Lucerne). It's always easy to get to and you still get the "alp" feeling.

Is it because all Finnish men look the same? :P
Well, shave Pyry's head and keep feeding him breakfasts like that and he will soon look like you as well... :)