Hot Time In The City -
It's been hot around here for the past week or so; and...I like it (I can't believe I just said that!)! Of course, it's not the stifling heat combined with humidity that one experiences in Chicago, but it is DEFINITELY heat. For example: it was 34˚C/93˚F in the shade (up on the rooftop) with only 39% humidity. When a slight breeze would blow, it was actually tolerable. Compare this to a few weeks ago when I was in Chicago, and it was in the 90s with the humidity around 90%. My forehead would bead-up thirty seconds after walking out of my sister's house (God bless American air conditioning!).
Air conditioning isn't very common in Switzerland. My question is: What are the Swiss going to do if Global Warming continues to make summers hotter and hotter? None of the buildings are set up for air conditioning. Never thought about that one, did you???

Cat On A Hot Tile Roof -
King loves the roof. We often leave the apartment door and the door leading out to the rooftop open so that he can go up and down as he pleases. Last weekend, he found a new place to relax: under our Japanese maple. I think the hot tiles do his old bones good. 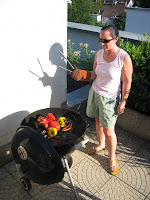 Roasted Peppers -Need some roasted peppers? Well then...the Weber is the only way to go. Just grill them over very hot coals until they're completely blackened, then put them in a covered bowl. After they've cooled, peel 'em and seed 'em. Awesome!

Can Stand The Heat...But Still Got Out Of The Kitchen -
Normally, Mrs. TBF likes to cook up a storm during the weekend. I handle the cooking duties during the week, but Mrs. TBF pretty much takes over the kitchen come Saturday. Last weekend was, for the most part, and exception. First we went to John and Rammy's house on Friday evening for dinner in the "garden of Rammy's dreams". Then, on Saturday night, we went to Douglas and Liz's (pictured at our house, along with Alan, this past Canada Day) house for burgers. They have a combo grill/smoker (should have taken a picture!), and now I want one too! I guess I'll just have to wait until the day comes that we move back to America. 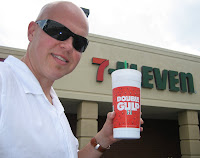 Making A Killing -
Why does soda pop cost so much in Europe? I just don't understand it. Here's an example: A .75 liter Coke costs something like $2.50 at the Burger King in Basel. When I was last in Chicago, I went to a 7-Eleven and bought a Double Gulp (which I think is about 1.9 liters) and it cost something like $1.50. Why does Coke cost twice as much here? It drives me nuts!
Tip: The Double Gulp cup is nice for long car trips because it doubles as a pee receptacle after you've finished your drink; great for long driving trips...no need to stop!

I'm still waiting for BA to deliver my suitcase (it's been three weeks as of today!). However, FedEx tried to deliver something to me yesterday, and I think it's going to be my long lost bag. FedEx is coming back today; I'm keeping my fingers crossed.
Posted by The Big Finn at 7/19/2007 04:15:00 AM

i was totally surprised to see not one but TWO 7-11 stores in the smallish city of Lund. I'm sad to say I didn't go inside and check out their Big Gulp offerings, what was I thinking???

as for the peppers, have you ever had them stuffed with cheese? you put it in them before they go on the grill (feta is a good one) and hen eat them while they are still warm and the cheese.

I miss 7-11s. Today would be a perfect day for a nice big cherry flavored Slurpee.

That bit about the "pee receptacle?"

WAY too much information!

sara - I actually went to a couple of 7-Elevens when I was in Stockholm, but I don't remember if they had Big/Double Gulps or not. Thanks for the pepper tip, I'll have to pass it on to Mrs. TBF.

christinag - I haven't had a Slurpee in at least 35 years. I'll have to have one when I go to Chicago next month.

global librarian - I held back from calling it a "pee and poop receptacle"!