Going Back To Where It All Began...

The main reason for my recent trip to Chicago was so that my sister and I could drive up together to my parents' home in Sudbury, Ontario. It's about 665 miles one-way, and it usually takes around 12-13 hours.

For those of you who don't know...

I was born in Sudbury, Ontario, but my parents and I moved to Chicago when I was just over one year old. When my parents retired in 1993, they returned to Sudbury.

We've found that the best way to do the drive is to leave Chicago VERY early in the morning. So, that's what we did. We woke up at about 3:00 a.m. and were on the road at just before 4:00 a.m. Of course, we had to make one stop before we left: the Barrington, IL Dunkin' Donuts. Here we were at 3:49 a.m. with our XL coffees. My sister takes hers black (yuck!), and I like mine with cream and two Sweet 'n' Lows (yum!). Ever wonder what kind of people go to a Dunkin' Donuts between three and four in the morning? Ummm....us!

We used to make the Chicago-Sudbury drive every summer to visit relatives. Sure, the drive is long, but it's actually pretty enjoyable because it brings back memories of many, MANY childhood vacations. We made it through Milwaukee by 5:30 a.m. (avoiding rush hour), and Green Bay by 7:20 a.m. After Green Bay, we headed on up through the U.P. (upper peninsula of Michigan) where this picture was taken during a moment of boredom while driving through Hiawatha National Forest.

We crossed the border into Canada at Sault Ste. Marie, and then we stopped for a quick and greasy KFC lunch. From S.S.M., it's 3.5 hours through Ontario to my parents' house; no maps, no GPS. As a matter of fact, we could pretty much do the drive in our sleep, which is a good thing because my sister actually drove slightly off the road at one point in Ontario while falling asleep at the wheel with a belly full o'chicken! I was taking a nap at the same time. YIKES!! That woke both of us up...in a hurry! 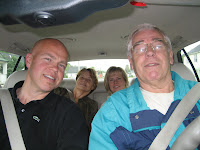 We arrived in Sudbury on Friday evening, and we left around mid-day on Monday because my sister didn't want to inflict more torture on my brother-in-law by having to have him take care of their four kids alone for more than a long weekend. After the long drive up there, we pretty much just wanted to take things easy and spend time with the folks and some of the relatives. I'm happy to report that my mom is doing really well after returning home from the hospital. As a matter of fact, to look at her you wouldn't even be able to tell that she was sick at all. While we were there, we all realized that it was the first time in about twenty years that just the four of us (without spouses/kids) had slept together under the same roof. Here we were, just the four of us, driving in the car together for the first time since the late 80s.

After a nice BBQ steak dinner (Canadian beef from Costco rules!!) on Saturday night, my sister and I went for a walk to try to burn off some calories. We wound around the area where my parents live, and at one point I snapped this picture of the Inco Superstack back-lit by the setting sun. In case you don't know, Sudbury is a mining town. I wouldn't call it ugly (it's much nicer looking than it was thirty years ago), but it's also not the prettiest city I've ever seen. 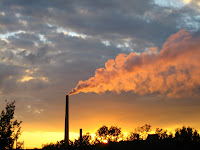 Great to hear about your mom's recovery.

But on a far more shallow note...isn't this post missing something important?

Paul Bunyon? Where art thou?

Sounds like you had fun. Glad to hear your Mom is doing well.

Sal - Sorry... We had a couple of construction delays in the U.P., and I missed old Paul. Maybe next time. Mrs. TBF and I will be driving up that same road in mid-August, so maybe then...

Michael - Thanks. Maybe we'll have a chance to get together when Mrs. TBF and I are in town in mid-August.

Your Mom is looking great. Happy to hear that she's well.

BTW. That's a really cool picture you took in the side mirror!

Aww, you guys are all as cute as buttons! So glad to hear good news about your mom. I keep forgetting that your parents live in Canada. Seems like everyone returns there eventually, don't they? I'm still workin' on that one. :-)

Glad to hear mom is fine.

That photos is fantastic!