This past Tuesday marked seven years since Mrs. TBF arrived in Switzerland.

How much longer? Who knows? Perhaps...two to three more years. Or, what I usually tell people is that we'll continue to live outside the U.S. as long as George Bush is in office (I moved here one month before the 2000 election). How many days is that now?

Overall, I like living here. Every now and then I get an itch to move back to Chicago, but I'm fortunate to be able to travel to Chicago three to four times per year to see family and friends, and those trips serve up a pretty good scratchin'!

Mrs. TBF, on the other hand, has no itch. Sure, she misses family and friends, but she really likes living in Switzerland and has said on several occasions that she could live here for the rest of her life.

Only time will tell. 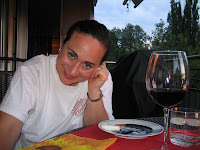 This past Wednesday evening, while enjoying a glass of wine on our balcony, Mrs. TBF reminded me that it was the seven-year anniversary of her starting at her current company; it's the longest she's ever worked at any one place. 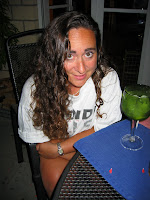 I decided to do some searching through the archives, and I found this picture from the evening of July 18, 2003. Mrs. TBF was out enjoying a cold beverage on the back patio at our old apartment; probably telling me that it had been three years since she started at her current company.

Well, maybe after 23 yeears, you'll get the itch ;) Of course, I wasn't as fortunate to go home as regularly as you do. Maybe that will come, though. Who knows?

In 2003 my husband (we were not yet married) thought "two to three years"...then in 2005 we thought "just until C permit"...then we changed cantons and that got extended a year...now we're saying 2 to 3 years, but who are we fooling? It's La Good Life here, I think you have the right system, go back to the US and buy stuff a couple times a year and come back and enjoy. Personally as long as I have Carmex I can live anywhere, and they even sell it here now, so I'm good.

I knew it then and was deeply saddened when you left. I have accepted it now and I'm even encouraging you to stay. Why, if you love your life there and love the travel it offers, would you EVER return to Illinois?