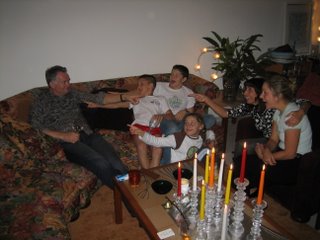 My MOM turned 60-something. She and my dad are on their way to Basel right now as I type. American Airlines called my sister's house just before they were all set to leave her house for the airport at 1:00 p.m. in order to catch a 4:55 flight from O'Hare to London. The flight ended up being changed to 8:00 p.m., so they'll be here at 4:20 this afternoon instead of 11:15 this morning. I slept until 9:00 a.m., and I feel good. They won't!

THE JEEP was purchase seven years ago yesterday, and its not looking too shabby since it barely has over 40,000 miles on it.

Jo the mom-in-law turns 70-something today. She's not looking too shabby either!

EHH here again....TBF you and Mrs. TBF have yourself a wonderful time with your parents!!!! Its now 2 hrs. from now that they arrive so you must be itching at that Jeep wheel!!! How can anyone just have 40,000 on a car that is 7 years old!!!! Wouldn't happen back in North America!!!! Well at least not with us!!!!

I think I saw you as you were on the way to the airport to pick up your parents... but why would you be driving through our neighborhood to get there? Anyway, you didn't see me (or maybe you didn't recognize me pushing a baby stroller), and I couldn't get your attention, but I have to say that you looked very intense behind the wheel, almost as if you were in a hurry. It was about 3:45. I hope you made it there in time!

Happy Everything....enjoy the time with your folks!

Gretchen - I was on mailbox duty at one of your neighbors. I brought in their mail, and then I went to Coop. So, I guess I was in a hurry trying to cram in two things so close to my parents' arrival.
I did make it on time to the airport even though their flight arrived fifteen minutes early.

40K on the jeep makes me jealous, although around here, you really don't get too many kms on cars. P's car is something like a 1993 VW Golf and besides getting some major work it has something like 130K on it!