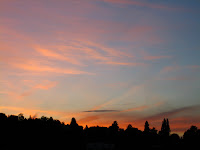 The weekend began on Friday evening with an orange sunset. 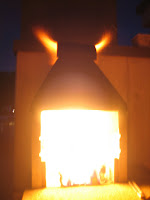 Later, we fired up the rooftop "blast furnace" and were successful in producing orange "devil horns"!!! 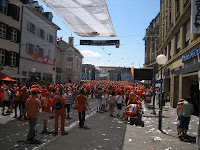 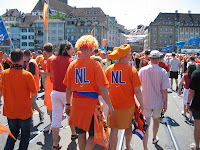 On Saturday afternoon, we decided to venture into town to witness the "Orange Crush" of 100,000+ Dutch soccer fans descending upon Basel for the Holland vs. Russia Euro2008 quarterfinal match. I have to say that although the Dutch fans were a bit messy, they did make for some good people watching, and they did actually seem to behave themselves. It was pretty hot outside, and the Dutch looked like they were drinking A LOT, so I'm thinking there had to have been some pretty nasty hangovers the next morning. The hangovers were probably made worse by some really nasty sunburn AND by the fact that Russia ended up advancing to the semi-final by beating Holland.

I'm really going to have to sit down one of these days, focus, and force myself to watch an entire soccer match. I just don't know if I can do it. For some reason, a game that often ends up in a 0-0 tie after 90 minutes of play just doesn't mesh with my short, North American attention span. I mean, there are hardly even any shots-on-goal.

Oh, and don't even get me started with the "flopping"!

A defender doesn't even touch the guy with the ball, the guy with the ball goes down in a heap acting as if his spine has just been severed, the ref calls a foul on the defender who makes all sorts of faces and gestures to no avail, and then the guy who just looked like he was going to be in a wheelchair for the rest of his life just gets up and continues playing.

SOCCER HAS GOT TO BE ONE OF THE WUSSIEST SPORTS (second only to cricket) I'VE EVER SEEN!!!

I agree, soccer is just about the wussiest sport known to man and most football players are girls.

However, if you ever got hit with a cricket ball either in the face so hard that it cracked the visor on your helmet or even across the knuckles, you might rethink cricket being the wussiest.

ms mac - First of all, let me just say that both soccer and cricket are games and not sports - I erred in my post. Also, I've played both cricket and baseball, and I agree that there is great potential for injury in both games while batting. As a matter of fact, I once had to go to the emergency room after being hit by a pitch (which resulted in internal bleeding) while playing baseball. However...

My personal feeling is that any game that has meal breaks is waaaaaaaaaay too long AND geared toward sissies. If the cricket match lasted, say, no more than four hours, and didn't break for meals, then I would gladly remove it from my list of "pussboy' games.

I think the Russian Mafia payed off the Netherlands to fix the match. I refuse to believe my beloved Oranje who were doing so well just up and lost. Don't mind me I am bitter.
At least Portugal lost, I would have not heard the end of it for DAYS in my neigborhood. Those are my criteria for the footy.

dp - I was also going with the Russian Mafia angle, but I thought that they paid off the refs.

Speaking of wussies - did you see the Croatian team crying like babies when they lost to Turkey?