You know how things often happen in threes? Well, our "stone" trilogy was just completed. 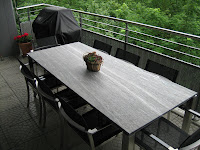 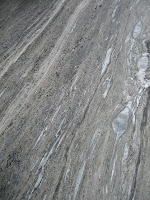 First, I busted my butt a couple of weeks ago hauling up a bunch of stones (they felt like boulders) to our rooftop garden to use as a border. Then, we bought a pizza stone. And today, we took delivery of our new balcony table with a Swiss stone tabletop. I'm not really sure what kind of stone it is, but I do know that it comes from a quarry in the eastern part of Switzerland, so Swiss stone will have to do for now. Another thing I know is that I like the way the grain looks; little flecks that sparkle in the sun. All in all, I'm happy with it.

When we moved here way back in 2000, we pretty much thought that we'd live here only for 2-3 years. What that meant was that a lot of the stuff we bought after arriving in Switzerland was bought with the idea that we'd have it for 2-3 years and then just get rid of it (read: cheap). Seeing how a lot of this stuff is now in its third "2-3 year" phase, we figured that there's no time like the present to be replacing the now nearly eight year old stuff with new stuff.

This afternoon at precisely 4 p.m., three delivery guys showed up and brought up the frame, the chairs, and then grunted as they were (luckily!) able to fit the 130 kilo (286 lbs.) stone top into our elevator. Otherwise it would have been four flights of stairs for them! 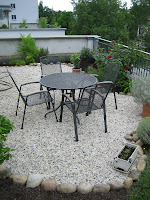 Email ThisBlogThis!Share to TwitterShare to FacebookShare to Pinterest
Labels: hoping our balcony can take the weight of the table and eight diners, new balcony table, out with the old and in with the new, things happening in threes

I love the new table!

That table looks great! At least that was one stone you didn't have to carry up the stairs.

However, I did have to carry the old table up to the rooftop.

Its a gneiss, a metamorphic rock. The white inclusions are feldspars.

No kidding - I love your new table and your rooftop garden is looking incredible!