We woke up to a strange sound at 7:00 a.m. yesterday morning. Strange for a Saturday at least - the clock radio playing Bob Seger's "Roll Me Away" (gotta remember to change that CD one of these years!). Normally, the Saturday wake up call is King poking my nose in the neighborhood of 8:30 or so because he wants to be fed. I tell him to F-OFF, and then I squeeze in an extra hour. However, this morning was different. We had to get up to get ready to catch the 9:17 a.m. train to Strasbourg.
For whatever reason, we had decided earlier in the week to do a day trip to Strasbourg which would involve walking around the home of the European Parliament in the dead of winter, freezing our derrieres off. Maybe we were going through travel withdrawl. Who knows? Afterall, it had been over a month since we'd returned from Vienna, and I guess we were looking for something to liven up the winter doldrums.
This was my third time in Strasbourg and Mrs. TBF's second time. She hadn't actually been there since November, 2000. We've only been there during the cold months, and we really do need to check it out sometime when it's warmer outside. I'm sure it's nice during the summer when it's full of flowers and the restaurants have tables set up outdoors. It's actually even very nice during the winter, but...it's COLD!!!! We froze!!! Maybe it has something to do with us both having lost a lot of weight, or maybe it has something to do with us getting older, but...we just can't handle the cold like we used to. For gosh sake - I have 100% Finnish blood, I was born in Canada, I grew up in Chicago, and I can no longer handle temperatures too far below freezing. I'm a wimp! 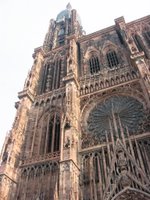 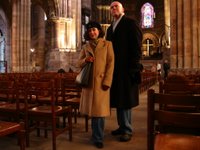 We arrived at the train station, started walking toward the cathedral, and fifteen minutes later were inside a coffee shop trying to warm up. We eventually made it to the cathedral (which is really impressive on the outside), went inside to warm up a bit (I don't think it's really heated), listened to the organist playing the massive pipe organ for a few minutes, and then we walked out at 11:45 a.m.
I had made a reservation at a restaurant called La Cloche a Fromage earlier in the week. I found it on a Strasbourg website, and it looked good (any excuse to consume mass quantities of French cheese is fine with us). Our reservation was for noon, we arrived at the restaurant at 11:55 a.m., we were greeted at the door by one of the waiters, and he said that we'd have to COME BACK IN FIVE MINUTES! He wasn't mean about it, it was just kind of a rules are rules type of thing (maybe he was Swiss!). So, we went back out into the cold, walked around for five minutes, and then returned to the restaurant. 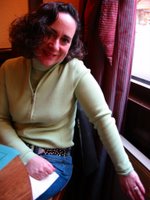 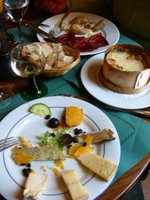 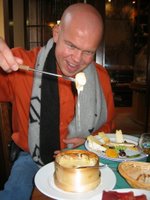 Fortunately for us, we were seated at a table right next to a radiator, and we sat holding our hands and feet about an inch away so that we could warm up. We continued the dethawing process with some onion soup which warmed us up enough so that we could enjoy the rest of our cheesy meal washed down with a little Alsatian Tokay Pinot Gris. I had a plate with several different cheeses. Mrs. TBF had a baked Vacherin Mont d'Or. As usual, I liked what she ordered better than what I had ordered. And also as usual, I couldn't keep my greedy mitts off of her food! 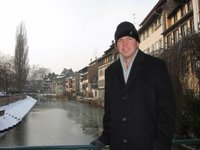 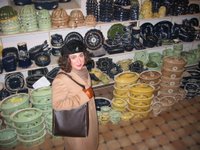 The rest of the afternoon was spent walking around with frozen feet enjoying the wintery scenery, doing a bit of shopping, and stopping in a cafe for the occasional warm up.
We took the 4:55 p.m. train back to Basel (it only takes about 1 hour 15 minutes) armed with some stinky French cheese from the restaurant's store, some sweets, and a bag full of lingerie that Mrs. TBF bought at Body One (whooo-hooo!).
Like I said, I'd like to go back someday soon. But, the next time we go back has to be when it's warm outside.
Posted by The Big Finn at 1/29/2006 11:30:00 AM

Oh OH OH... I love Strassbourg! I want to go back again someday... And i love your report.

I went there in 2002 in April. They had vendors out that day selling their belongings right outside the train station (was a flea market). I then got to see some more of the street and then met my friend for coffee shortly after that. Too bad we didn't see more of the city but I'm happy you did.

Wear those thermals underneath!! They help me a lot always. I guess I'm always looking for warmer wool looking non hiking shoes too.

You guys looks so spiffy and cute. I'm sure I'd be a bit of a baby too since we've only had plus temps all winter, mind you we've had rain for 27 days so far in January...

Strasbourg, Mulhouse, you Basel lot are so exotic!

Even though we've driven thru Strasbourg numerous times on our way to Belgium, we've never taken the time to have a look around, We should def. do that one day!

Hey TBF - Why didn't you call?? We would have either said: Were comon' with you - or Shut up! We're stil sleeping!

We we in Mulhouse on that day!

Ahh that Vacherin makes me drool! And body one? Hmmm. I just spent an enormous amount on that stuff just a few weeks ago. I'll drop by anyway. Just don't tell Orange of the purpose of our next trip to Strassbourg, okay ;-)

Ha! Spotted the intentions of CS. Well, I won't complain when visiting the "Body one"! Driving back from Mulhouse we discussed going to Strassbourg soon. Must be a nice place!

Well, we'll make sure to have some nice cheeses too. I just love cheeses. My favorite dinner on an evening when you don't feel like cooking: baguette, cheeses and red wine. Cheers! :-)

PS: have you seen a Boss store or any stores that sell Boss? I'm looking for a nice black Boss coat I saw in Basel (Pfauen) a few weeks ago. Stupidly enough I didn't buy it then...

Orange-X: I haven't seen a Boss store, but I have heard that there's a Boss outlet store somewhere in the vicinity of Stuttgart. Maybe you could do a Google search?

Hey, you guys still in Strasbourg?? ... My turn to harrass. Hehe.