As an adult, I've never been one to really celebrate my birthday. I'm not sure why, but I've always been happy just receiving a few birthday cards in the mail, having Mrs. TBF cook me a special dinner, and that's about it. No gifts, no parties, no nuttin'. 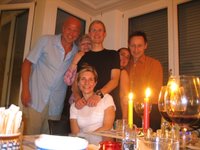 First of all, as she normally does, Mrs. TBF asked me what I wanted for my birthday dinner. My answer was lasagna, of course. Her lasagna is, in my opinion, WORLD CLASS! I no longer order it in Italian restaurants because it always pales by comparison. She told me that the lasagna would be no problem, and that she was thinking "...about inviting a few people over on your birthday for a birthday dinner." Yes, it was a violation of TBF birthday protocol, and yes I have to admit that I did grumble about it for a couple of seconds, but I ended up giving in to her wanting to have a little weeknight dinner party because few things in life give her more pleasure than planning and preparing for a dinner party. Jeanette, Suzanne, Corey, and Ronny came over, and we had a really nice time. I went to bed around 2 a.m. with a "happy tummy" and a "...SEE? It's not so bad celebrating your birthday with other people, is it?" comment from Mrs. TBF right before I dozed off and began the process of saturating Mrs. TBF's and my pillow with garlicky saliva for several hours. 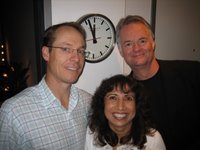 On Friday night, we had a true "Impromptu Friday". Andy, Rammy, and John showed up just before midnight on their way home from a get-together at an Irish pub in town. They were thirsty and hungry, so I whipped up a batch of martinis, and Mrs. TBF "threw together" some pasta with some of the leftover lasagna gravy. Although this wasn't an official birthday celebration, it did kind of end up serving as a springboard into the weekend that culminated in a surprise party for me at John and Rammy's house on Sunday. More about that later...

We made our way by tram to Sean and Gina's apartment on Saturday night. Gina made some really good Ecuadorian food, Sean poured the never-ending BIG glass of wine, I loaded up on too much Ben & Jerry's ice cream for dessert, and then we took a cab home in the wee hours of Sunday morning. It was yet another night of going to bed with "happy tummy". Sorry...forgot my camera.

And, yes...earlier, I did say "surprise party". 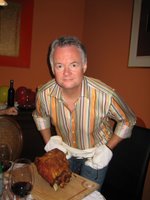 Now, Mrs. TBF has heard me say year in and year out that surprise parties are absolutely forbidden. So a surprise party was the last thing on my mind when we were invited over to John and Rammy's house for an English lunch (roast beef, Yorkshire pudding, foie gras...ok, maybe that's not so English). I was just minding my own business, stuffing my face full of starters in the TV room, when I heard the call that lunch was served. I walked with John and Andy toward the dining room, opened the door, and nearly had a heart attack when everybody yelled surprise. There were streamers, balloons, presents... my god...I was completely stunned. Because of my strict ban on surprise parties, it was the last thing in the world that I ever expected. Even though I was the center of attention, I ended up having a great time. The food was awesome, the wine was terrific, I had a lot of fun, and I left with a bunch of nice gifts to go along with my haul from Wednesday night. And, you know what...?

I had such a great time over the past week that I now want to celebrate my birthday with friends every year from here on out. That's right Mrs. TBF, I'm a changed man. You now have my permission to arrange a birthday bash for me every year for the rest of my life.

That's my idea of a birthday celebration! I'm so happy that it was a terrific time for all.

just wait 5 years, my mom always celebrated her birthday for a whole week but since she hit 50 she now claims she gets a whole MONTH of birthday celebration :)

I have never outgrown the excitement of my birthday. When I was a kid, my family made a big deal out of our birthdays and I have carried on that tradition. Imagine my childlike disappointment now that I have to share my day.

Glad to hear you had a good time!

wow - that sounds like so much fun! I'd agree though, dinner parties are fun!

I agree that surprise parties are so much fun. I had my last cool party just days before leaving for Switzerland, about 5 years ago now...

I think it's a great thought: TBF's Birthday week. Let's make an official annual event out of it and link to an international holiday! I now proclaim 13th September as Inernational Holiday World Wide. Celebrate good times...