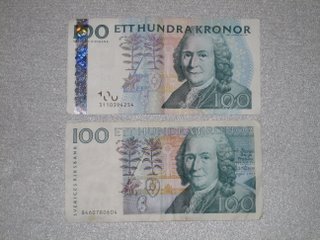 Unbeknownst to me, and probably every other tourist in Stockholm, Sweden changed their money awhile back. If you look at the bills in the picture, you'll notice that the top bill has a silver stripe along the left border - that's the "new" bill. The old bill on the bottom did not have this stripe. My guess is that the stripe was introduced as an anti-counterfeiting measure. Whatever the reason, I came to find out that everybody had until last April to turn in their old bills for new ones at the bank.

So, guess who ended up with an old bill? Me, that's who. I found out when I was paying for some things at a 7-Eleven (Why don't we have 7-Elevens in Switzerland?) by the train station. The lady behind the counter said something to me in Swedish as I was paying, I looked at her with that I-have-no-idea-what-you-just-said look, and then she immediately switched to English. "I can not accept this bill..." she said, and the proceeded to explain why. I just handed her another bill, and I figured I'd unload it someplace else.

The next day, I went to the train station for a coffee (the coffee at the Sheraton was awful), and I tried to pay with the old bill. No dice! The coffee guy told me the background about having to turn all the old bills in at the bank last April, etc. He suggested I try Forex currency exchange, or a bank.

I went to Forex office at the train station, and I was advised by the lady that the only thing that can be done with the bill is to have it deposited in a bank account. However, the catch is that YOU HAVE TO BE A SWEDISH CITIZEN in order to do so. Foiled again! Now I was beginning to get a bit perturbed.

I went back to the Sheraton and explained the dilemma to the lady at the front desk. First, she told me that I should go back to the place that gave it to me and demand an exchange for a new bill. After telling her that I had probably spent money ten times the previous day, and that there was no way for me to know who had given me the old bill, she told me that I was pretty much stuck with a worthless bill. I even went so far as to ask her if she would exchange the bill for a new one since she was Swedish and could just deposit it into her bank account. "But...they will charge me a service fee..." was her response. It was precisely at that moment that I came up with a plan: I would pass the bill off as a tip. It would work....IT HAD TO WORK!!! The frugal Finn was percolating inside of me, and there was NO WAY I was eating 100 SEK/$10.77 U.S./13.69 Euros.

The next day (Friday), we moved to a different hotel for the last two nights of our trip. Mrs. TBF had one last meeting to attend, so I just took a taxi to the new hotel with our bags. Upon arrival at the hotel, a nice young man (who turned out to be Finnish), brought our bags up to our room. We spoke for a few minutes in Finnish, he wished me a pleasant stay, and then I unloaded that old bill...and my aggravation. I'm sure he thought it was a nice tip...until he saw that it was an old bill.

I hated doing it to a "Finnish brother", but...

A very good idea you had on getting rid of that bill via tipping!

Too bad you did not use it to tip a waiter for uncorking a bottle of wine for you.

That was a very good idea, indeed. However, I don't understand that Forex didn't take in in and exchange it for a new bill. Well, at least you got rid of it :-)

CB - The service charge is already included in the price of everything at the restaurants in Sweden. The custom is to leave a little extra by just rounding up the bill. And, for the most part, the service was pretty good at the restaurants. It wasn't overwhelming like in America, but it was better than it is in Switzerland.

CS - I may not be totally clear about this, but apparently I had to be a Swedish citizen to open an account. Plus, if the lady just personally exchanged my bill for a new one, it would have cost her more than 100 SEK in service charges to deposit the bill into her account. Rules...RULES!

See? If they'd just get on the stick and get on the Euro you wouldn't have had this problem.

Hi, I'm un-lurking for the first time to comment. I find is quite mean that the grace period for the old notes is so short and the exchange process so complicated. Not to mention the mean person who foisted this note on you in the first place.

I have a nicer story to relate about the banknote change in CH. A friend of mine passed through here some 15 years ago and still had bills worth about CHF 200. Last year she visited me, and we went off to try to exchange the money in Zürich. Actually, first we tried to use them at an SBB counter (we didn't really know anything about the old money) where the practically-teenaged clerk didn't seem to recognize them. Then we went to the UBS on Bahnhofstrasse. Unfortunately, I didn't have my UBS account card on me, and the snotty elderly employee brushed us off and told us to go to the SNB. He was technically correct (the deadline is 2020), but did he have to be so unfriendly? Happily, the UBS at Paradeplatz came through for us. There, a nice young fellow exchanged the bills for free, no questions asked. Go figure.

Dixie - I agree. It's not often that I'm forced into using a currency other than Swiss francs, Euros, U.S. dollars, or Canadian dollars. I wish there was one world currency - it would certainly make things a lot easier. Next month I'll be forced to use Czech Koruna. 100 CZK = 5.59 CHF...ugh!

ZC - thanks for unlurking. I didn't even know there was old Swiss money. I've never seen any.

Yeah, I hadn't seen the old notes either until my friend visited. The current series was introduced between 1995 and 1998. Have you seen the new, proposed ones? I don't think I like them, they look like someone went overboard with the gradient command in Illustrator. And that's the least of my complaints:

ZC - Thanks for the link. I had never seen, or even heard, of the proposed design. I couldn't find if/when these new bills are to be released. Any idea?

The circumspect Swiss started the process of designing new notes in advance of any actual date, though the earliest would be 2010. Also, the SNB doesn't consider itself bound by the decisions of the jury that selected the winners. Source:
http://www.snb.ch/e/banknoten/neue_noten/ref_051123_rt.pdf

They're even leaving the door open for the possibility of adoption of the Euro. Read the last paragraph here:
http://www.snb.ch/e/banknoten/neue_noten/pre_050202.pdf

Boy, I'm such a geek. Signing off now on the bank note business.

This actually happend to a friend of mine, a few months ago. He ended up doing something similar like going to a smaller town in the suburbs and 'unloading' the bill there, but he was pretty pissed off.

They sort of gave me a hard time when I tried to use a 100€ bill to pay for some stuff at the mall; and the French people asked me where I got it and where I was from and needed passport and all. And all I could manage to tell them was that I had obtained it when I ordered Euros from my mom's bank. It was a real bill no problems, just it was a huge deal with pay with that amount of currency. Weird!