Sunday came, and it was time to go back home. We checked out of our hotel, asked them to store our bags, asked the concierge for a restaurant recommendation for lunch, and set about enjoying our last few hours in Stockholm. It was about 10:30 a.m., and we had to be back at the hotel by 2:30 in order to grab a taxi to the airport.

The concierge recommended a couple of restaurants. One of the restaurants was close to where we had eaten lunch the day before, so we took off in that direction. Since we figured that the restaurant probably didn't open until 11:30, we stopped for a much needed coffee along the way.

We found out that many restaurants in Stockholm don't open for lunch until 1:00. So, we took off in the direction of the second restaurant (the first one didn't really appeal to us) and stopped for another coffee.

While enjoying our coffee, we kind of discussed our experiences during the past few days. Here's what we determined:

We could live in Stockholm. It's a pretty city, Swedes are definitely friendlier than the Swiss, but the high taxes are a bit of a turn-off. Mrs. TBF said that I'd probably have a different opinion if I had had to endure five days of dreary weather instead of brilliant sunshine.

I found Stockholm to be not as clean as I had expected. Don't get me wrong...it's very clean by international city standards. However, I didn't find it to be as clean as Basel or several of the other Swiss cities I've visited.

I've said it before, and I'll say it again: Eating in Stockholm is VERY expensive. I guess you could swing it as a tourist on a limited budget, but you'd be eating fast food or just grabbing a sandwich at a small shop. The hotels are comparable to Switzerland...which makes them expensive when compared to other European cities.

Swedes smoke WAY less than the Swiss. You rarely smell cigarette smoke in Stockholm. You don't go home after eating at a restaurant with your clothes smelling like smoke.

Restaurants are expensive, but the bus and boat tours seem fairly reasonable. Strange.

Swedes look different than Finns. I can't describe it. They just look different. And, you can instantly tell when you're in a place that is frequented by locals. The people suddenly just look...well...Swedish.

Stockholm vs. Helsinki: I liked Stockholm's old town and the bridges. I like Helsinki's Esplanade. The service in restaurants is about the same in both cities - somewhere between unenthusiastic Swiss service and intrusive American service. Helsinki seems a bit cheaper. You don't see drunks staggering around the street in Stockholm (didn't see even one) like you do in Helsinki. It's kind of a toss up. Where would I rather live? Probably Helsinki since I speak Finnish. However, EVERYBODY in Stockholm (as well as Helsinki) speaks English. And, they speak it very well. You could easily get by living in either city without speaking the native language.

So, anyway, there you have it. We waited with a bunch of other people for Sture Hof to open. The doors opened at precisely 1:00, and the restaurant was nearly full by 1:10. We ordered our food within minutes of being seated, and then settled down to what we hoped would be a good meal. 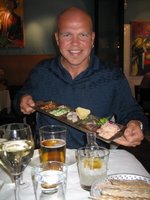 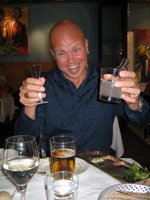 Mrs. TBF and I both had nice starters. Mine was a herring plate that I elected to pair up with some aquavit with a beer chaser. I read in my guide book that it's a very Swedish thing to do. Plus I saw a couple of other guys order the same thing.

We kind of had to rush it a bit, but Mrs. TBF enjoyed her fish, and I enjoyed my brisket. Why can't we have brisket in Switzerland? I want brisket (along with a gourmet food hall and 7-Eleven) in Basel NOW!!! After settling the bill, we walked at a brisk pace back to the hotel, grabbed our bags, jumped into a taxi, and were whisked away to the airport.

Our visit to Stockholm had come to an end. Although it was a good five days, I was happy to be going home. I definitely left Stockholm with a good taste in my mouth.

great recap... You know my new photo assignment is people. Now if I were in Basel for just one day... I'm sure I could capture a winner out of you. LOL... I'll have to stick to Vancouver, but I hope I can find something funny...

It's funny you mention the clean cities, as I've not seen many. Toronto isn't that clean, just becasue it's very urban, Strasbourg is semi-clean (until you find out they throw garbage into the river), but I find that the smaller the town, the better looking it always is!

By the way, I love your tagline; it reminds me of my life. Born in Canada, grew up in Sweden, school in Canada, living in France while at exchange university in Canada through Sweden. Confusing yes; but it's always a good conversation starter as you can well imagine ;)