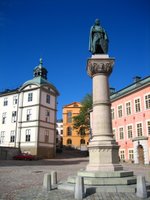 We were very lucky. The weather was great the entire time we were in Stockholm. I'm talking blue sky, low humidity, 23˚C (low 70s˚F) type of weather. Here's an example of what it was like most of the time. Pefect weather for...riding the double-decker tourist bus.

I know, I KNOW. There's nothing more touristy than riding that hop-on hop-off bus. But, I don't care. I like it, I've been on them in many cities, and I will continue to do so. I think it's the best way to get an overview of any city you're visiting.

We bought our bus tickets at 3:00 p.m., and it was fortunate that they were good for 24 hours, because the bus stopped running at 4:00 p.m. Mark and I went straight up to the upper deck, put on our headphones, and began our brainwashing.

Now, I'm all for people being proud of their country and city. I'm proud of my Finnish heritage, and lord knows I grew up hearing about how great the Finns are. But never, ever, have I been on a bus tour where I heard such proclamations of greatness.

I happened to take this picture of myself right at the moment when Mark said: "Hey...does this seem kind of...oh, I don't know...propagandish to you?" That's why I'm laughing in the picture - I was thinking it, but I didn't really want to say anything.

By the end of the tour, Mark and I almost had to slap each other in the face in order to snap out of our Swedish trances. We somehow fought the urge to run directly to the royal family to pledge everlasting allegiance to their peerless society.

Deep down they're just jealous of Norwegians...

now those are some blue skies...
LOL love kirks comment.

If they just didn't eat those fermented fish sandwiches...

And I thought the Japanese had the longest life expectancy.

FYI...I did not see lutefisk on a menu even once. But, the herring and salmon was great!

CS - I just looked it up. Here are the top countries for life expectancy at birth 2004:

It looks to me like you have some pretty good genes. I'm thinking you should at least make it to 80 (maybe cut back on the smokes?).