As I mentioned before, the reason we were in Stockholm was because Mrs. TBF had to be there for meetings. Since she had to be there from Monday to Friday anyway, I figured I'd tag along and take advantage of the "free" hotel room during the week.

Originally, I was going to fly to Stockholm on Thursday afternoon. However, I changed my ticket to a Tuesday departure when I found out that Mark was going to be going on Tuesday, and that I'd have somebody to hang out with during the week. Mark is Lisa's husband, and Lisa is colleague of Mrs. TBF's. The meetings were going on until midday on Friday, so we had a couple of days to fill. What to do? 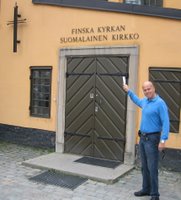 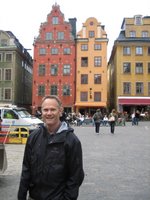 Mark and I decided to just walk around and take in the sights. We ventured into Gamla Stan, which is Stockholm's old town, and wandered down narrow cobblestone streets. We were just two guys walking around town - no agenda, no hurry. Mark snapped a photo of me in front of the Finnish church, and I snapped a picture of Mark at Stortorget where we stopped at a cafe for a hot (white) chocolate. At some point, we decided we were hungry and stopped for lunch.

Eating in Stockholm was very expensive. Now, granted, we weren't eating fast food. However, the prices of the food when compared to comparable restaurants in Switzerland was much, MUCH higher - at least 50% higher. My lunch on Wednesday at Café Opera was 750 SEK which translates to 80 Euros or $100 U.S. I had one beer, one small bottle of water, a starter, a main course (reindeer meat on mashed potatoes), and coffee. It was very good, but DAAAAAAAAAAAAAAAAMN! I found out later that we had just picked a very expensive place to eat because the other places Mark and I ate at (Pontus By The Sea, Lisa Elmqvist, and Fem Små Hus) weren't quite as pricey. Swedish cuisine is interesting. Sure, you have your salmon and herring, but there's also a definite French influence. Many places I read about were described as having a Swedish-French fusion. The food was very good...but expensive.

sounds like a fun time. Love the colors... But yes it's good to know the food is really expensive.