I blew my blogging wad on Stockholm, and now I'm not in the mood to do a "real" Friday Flashback. Ergo, I'm going to just do a recap of the week.

Monday: Nothing of any interest whatsoever happened. Next... 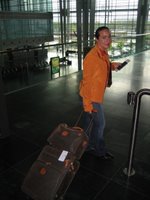 Wednesday: After returning from dropping off Mrs. TBF the day before, I e-mailed Barry of The Swiss Job to see if he wanted to get together for a drink. We agreed on meeting this evening at Paddy Reilly's Irish Pub in Basel for a couple of pints of Guinness. He's a good "kid", and I've decided that I'm going to refer to him as "da Kid" from now on since I came to realize while we were talking that I was 17 years old when "da Kid" was born.

We decided to grab a bite to eat after our pints, and we ambled on over to Gifthüttli - which is one of my favorite local joints - for a little grub. I hadn't been there for awhile, and it was nice having their Basler Art (veal cordon bleu, stuffed with foie gras, dipped in egg, and pan fried) for the first time in ages. Unfortunately, I forgot about the fact that I had my camera on my belt. So, there are no pictures of the historic first meeting between TBF and "da Kid". However, I'm sure we'll get together again at some point soon when our ladies are in town. 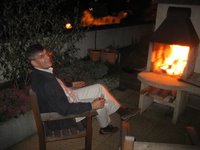 Thursday: Tom, our old neighbor from Reinach, was in town. Tom moved back to the U.S. a couple of years ago, but he comes to Basel several times per year on business. We decided to walk over to a local restaurant that I've never been to before but had passed a zillion times in the car - Restaurant Basilicum.

Mrs. TBF and I almost went to Basilicum a couple of years ago with a group of friends. However, our neighbor (Suzanne) did a walk-by to scope it out, and "...didn't like how it looked", so we ended up going somewhere else for dinner. As far as Tom and I were concerned, the restaurant fit the bill: open and serving food. So we went...

And, the verdict? VERY GOOD. Nothing fancy, but the food was really tasty and reasonably priced. Unfortunately, the only customers in the restaurant at 8:00 were Tom and I, and then a couple came in about 20 minutes later. That was it. So, if you local Basel people want to try a good restaurant, I'd recommend Restaurant Basilicum which is across the street from the Bottmingen Coop at tram station Batteriestrasse (Line 10 & 17). They could use the business!

After dinner, we walked back home, grabbed a couple of glasses of whiskey, and went up to "the fishbowl" where we enjoyed the first rooftop fire of the fall. It was a nice, clear evening, and we talked until well past midnight.

Friday: This morning, I dropped Tom off at Basel Airport, and then returned home for an intense blogging session. It's now time to go to the gym, and then I'm going out for a dinner/wine tasting with some friends at Restaurant Bruderholz later this evening.

I like it, only because you're taller than me!! Great catching up with you TBF and looking forward to the next pint!

Basilicum sounds nice. I can't wait until I'm "off duty" and pay you guy a visit for an evening fire in the fishbowl.... By God it should be cold enough by then! Start the fire! ;-)

I always wonder about that place when I go to the Coop...maybe we'll have to check it out. It's definitely not the most appealing environment for a restaurant, though (from the outside, anyway).

Hmmm....what is Tom drinking by the fire? A single malt scotch, perhaps?

CB - Yeah. That's what I meant when I said "a couple of glasses of whiskey". I guess I've picked up the "whiskey" instead of "single-malt scotch" from our U.K. friends.

;-) how could semi retirement not be fun. hehe

I remember that airport in Frankfurt. It's the that I flew into when I arrived and was going to Strasbourg. Mind you I had to take the tram to the other terminal to get my bus, but I was stuck there for 5 hours since nobody would help me ;)