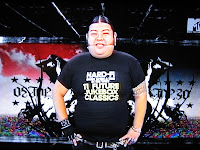 A very HAPPY HALLOWEEN from me, Mrs. TBF, and King!

A very Happy "Harroween" from VJ Boo of MTV Japan!

It's inevitable that the TV in our hotel room is tuned to MTV whenever we travel. Sure, it has something to do with me wanting to keep in touch with what "the kids" are listening to. But I also love checking out which groups/artists are popular in other countries.

I was happy to see that MTV Japan was not totally overrun with "Western" bands. Yeah, Rihanna, Justin Timberlake, and Foo Fighters (I really like their new single, btw) made their presence felt; nothing wrong with that. However, a good chunk of the videos were from Japanese artists such as Dreams Come True (I had never heard of them before) and groups with names that were in Japanese characters so I have no idea what they were called.

I also really enjoyed the VJs. Some of them spoke English really well. There was one in particular who would interview Western artists and spoke English so well that I'm guessing that she probably had a Japanese parent and a British parent. VJ Boo, on the other hand, while incredibly entertaining, probably had the worst English pronunciation I've ever heard. He'd be going on and on in Japanese, and then I'd realize (about ten seconds after the fact) that he had actually said an artist name and song title in English. It was painfully bad, but...infinitely better than anything I can say in Japanese, so it's best that I don't make fun.

I probably would have spent the whole first day of our trip in bed, taking naps, getting over jet lag, and watching MTV...if Mrs. TBF hadn't reminded me that we didn't fly a zillion miles so that I could stay in bed watching MTV Japan.

Thank goodness his name wasn't VJ Boo Boo. Wouldn't that remind you too much of that so called Swiss artist, VJ,... Uh, I mean DJ Bobo??

I'm sure that VJ Boo was much more entertaining!

Did you happen to catch any of the over-the-top Japanese game shows? I could have watched those for hours...

kirk - I missed the game shows, although I've seen clips of them on various programs throughout the years. Nope, pretty much stuck to mainly MTV and a few minutes of CNN here and there.