I have this friend named Dr. John. He used to live right down the street from us in Reinach a few years back. This Dr. John is not to be confused with the other Dr. John who currently lives a couple of kilometers from us. The Dr. John I'm writing about today is American, and he's a doctor of entomology. The other Dr. John is British, and he's a doctor of neuroscience...I think (we know a lot of doctors and I get their fields of study confused).

American Dr. John grew up in Wisconsin, and that means he grew up as a Green Bay Packers fan. I grew up in Chicago, and that would make me a Chicago Bears fan. Up until this past weekend, the Packers were 4 - 0, and the Bears were 1 - 3 (got off to a slow start). Of course, I was man enough to call Dr. John just over a week ago to congratulate him on the Packers' surprisingly good start even though, as a Bears fan, I loathe the Packers with every fiber in my body.

This past Sunday night, the Bears traveled up to Green Bay to face Brett Favre and the Packers, and...you guessed it...THE BEARS HUMILIATED THE PACKERS ON THEIR HOME FIELD. 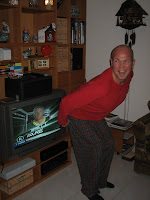 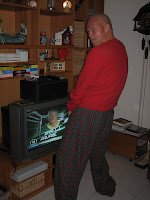 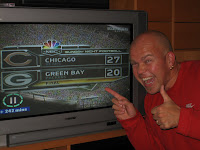 Oh...I'm happy. I'M VERY HAPPY!!! The only thing (along with defiling Brett Favre and gloating) that will make me happier is if the Bears beat the Packers again when they meet in Chicago later this season. Who cares about the Super Bowl? As far as I'm concerned, beating the Packers is my Super Bowl.

American Dr. John (who once saw Brett Favre at a bar eating a burger and fries, waited for him to leave, then went and sat in his seat and ate his leftover fries) has been uncharacteristically silent...

I'm sure that some Wisconsinites with big foreheads and bad mustaches will try to get their husbands to try to beat me up with their stupid cheesehead hats...and that's OK. You know where to find me...

I live in Basel, Switzerland...

Just ask a person from Illinois to show you where Europe is on a map!

Here's what American Dr. John wrote in an e-mail:

Oh, that is sooooooo wrong.

I still can't figure out how to post comments at your blog - please send directions, because I need to defend myself in front of the blog community.

Mr Brett is from about ten miles from my hometown...

then again maybe I shouldn't say that :)

cncz - Yes, she is. However, she's an exception to my vitriol. For the record: Gretchen does not have a big forehead, bad (or any) mustache, and I know she can definitely locate Europe on a map without help.
However, the love of cheese curds is some cause for concern...

I went to a Dr. John when I lived in Germany.

I have no idea what you're talking about for the rest of this post.

Maybe she has already outed herself and I missed it, but not sure whether Global Librarian would appreciate you discussing her mustache or lack of it using her real name...

It's true, I am a Packer fan, but I don't have a big forehead or a bad mustache. I do have a cheesehead, however, and I plan to beat you up with it the next time I'm in Switzerland!

Thank you for making me an exception to your vitriol. That's much appreciated.

I love Brett Favre and would absolutely eat his leftover fries if given the chance!

GL is named Gretchen too? I was talking about another one. Gretchen from Expatter uses it in her profile so I thought it was cool to say it.

I feel so popular.

The best part of the game? Watching the stunned look on the fans and players faces when WE WON.

Um, I had obviously smoked one bowl of crack too many when I made that earlier comment. Don't mind me...