Riding Off Into The Sunset...

This past weekend, we took what we think will be our last driving trip in the Jeep. I've been threatening to sell the old gal for quite some time now, and I think it's finally going to happen either this week or next. Since I don't even want to think about what's involved with selling a car in Switzerland, I'm just going to opt for the easy way out; selling it to a dealership.

Yeah...I know I could make more money by selling it to a private party. However, an extra couple thousand bucks isn't worth the aggravation to me, so I'm just going to bring it to the dealership this Wednesday, have it inspected, take what they offer (I already have an idea from a previous visit), sign on the dotted line, go home on the tram, and wait for the money to be wire transferred to our bank account. At least, that's the car selling fantasy I have in mind. Seeing that this is Switzerland, I'm sure there'll be some type of red tape thrown into the mix. I'll let you know how it goes.

Getting back to this past weekend...

Mrs. TBF and I drove out to Nyon (near Geneva) to visit our friend Jeanette. Since Jeanette is now transferring back to Basel, we thought it would be nice to go out and stay at her place in Nyon one last time. So, that's what we did. After filling up the tank for what will probably be the last time (thank god I no longer have to worry about carrying bills smaller than CHF 1,000/about $850 U.S.), we made the just-over-two-hour drive to Nyon. 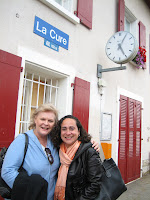 The weather ended up being better than expected, even though the forecast was ominous, and we decided - while enjoying a leisurely lunch at Jeanette's apartment - to take the train from Nyon up the mountain to La Cure. Once we got there, we realized that not much was going on, so we rode the train back down to St. Cergue where we had a drink before winding our way down the mountain back to Nyon. Overall, the train ride was very Swiss: great scenery (including a clear view of Mont Blanc), nice fall colors, not very exciting, clean, and safe.

Later that evening, the three of us went out to dinner. Then, we all slept in on Sunday morning, enjoyed a lazy brunch at the apartment, and then it was back to Basel.

We bought the Jeep on October 16, 1999. During last weekend's trip, the odometer went over 47,000 miles; not too many miles over eight years! It was nice having it, but I'm sure somebody else will get more use out of it than we did. Although we did drive it to Madrid, Burgundy, Champagne, and Zürich Airport (about a zillion times), most of the driving was just us running errands around Basel. The tram, taxis, and Mobility will serve us just fine. 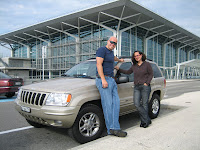 This morning, I drove Mrs. TBF in the Jeep to Basel Airport for the last time (I hope!). We decided to take one last picture for the sake of nostalgia. If all goes as planned, Mrs. TBF will be taking a taxi home from the airport this Saturday morning...and I'll be sleeping in!
Posted by The Big Finn at 10/02/2007 08:20:00 AM

And I thought Mont Blanc made pens?!?

So, now you'll have to take the bus/train to Geant now.

That's the big thing I miss now that we're out near Zurich. It was nice to have shopping in France 10 minutes away.

Then again, with the money you're saving from not having to fuel, maintain, and insure the Jeep, you can afford Swiss chicken now! ;-)

michael - They do, and cufflinks too!

greg - I'll probably end up taking a Mobility car to Géant, but I think I'll have to check out the bus at some point. I really don't go there as much as I used to; probably only once every three weeks. The only thing I really HAVE TO buy at Géant is oysters.

And here I thought you might wake up by 10:30 on Saturday and pick me up in a mobility car at the airport at 11:30. Oh well I can fantasize.
By the way I have only CHF50 in my wallet, which will hopefull be enough for the taxi or you'll have to meet me at the curb with some money!!!

So you're finally going through with it. How sad! I miss the Jeep already! I'm glad I had a chance to ride in it a few times... to Geant, to the garden center in Germany, to the baby store in Germany (to pick up our glider), and the ride to the Zurich airport on our departure out of Switzerland. I also appreciate all the junk it hauled for us to the dump and the time it took our ugly yellow fridge to its new home with Liz and Douglas. Thanks for the memories and good luck with the sale.

mrs. tbf - The only problem with the Mobility car is that I have to reserve it. If I reserve the car, and your flight is delayed, then I have to cancel it and reserve it again on short notice - might not be available with short notice on a Saturday.

Don't worry, 50 francs will be enough. Or, there's always the bus/tram combo which doesn't cost you anything since you have your annual pass.

Thanks for making all these sacrifices just so I can fly business class on my overseas flights. I really appreciate it.

gretchen - One last errand with the Jeep: I'll be taking King to the vet today for his annual checkup, and then I'll drop the car off at Emil Frey (after dropping King off at home, of course).

The mobility thing is finally catching on here (car sharing..) But cars are just needed here much more since transportation takes just forever!