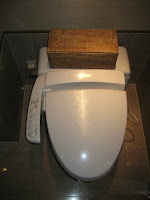 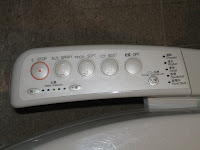 THE JAPANESE ARE THE WORLD LEADERS IN TOILET TECHNOLOGY!!!

I walked into our bathroom, and this is what I saw. When I sat down on the seat, I was surprised to find that the it was nicely heated. Then, I heard a little fan go on inside the bowl that served to keep the natural "rose and jasmine" smells that my body emits from permeating the hotel room and setting off the building's fire protection system.

After I was done with my business, I couldn't decide if I should go with the spray, soft, or bidet rinse, so I naturally had to try them all with various water pressure settings. Mrs. TBF was particularly amused by the noises that came out of the bathroom when the rinsing experiments were taking place; best described as a combination of a clown laughing, a Japanese school girl shrieking, and a cat hissing. A few words of advice: go with the low water pressure. Maybe I'm just not used to having water sprayed into me bum, but the highest pressure should probably, for liability reasons, be labeled as enema! Another tip? Flush the toilet before selecting the dry mode. Again...the "setting off the fire protection system" thing. 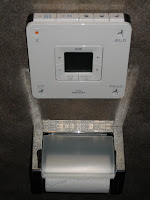 Later during our trip, the toilets were even more advanced. At our last hotel, the toilet lid went up automatically as one approached, the rinses had massage and oscillating modes (I think we're going beyond "cleaning" at this point, aren't we?), and the toilet would flush as soon as one stood up after participating in this technological marvel. Plus, two of our hotels had TVs in the bathrooms which one could enjoy while sitting on the throne.

I see that they have improved the technology! I laughed my ass off (good choice of words, eh?)at "power deodorizer"!!!

So where's the video of that experience, huh?

michael - DAMN!! I should have thought of that!

The toilet just about gives you a happy ending, huh?