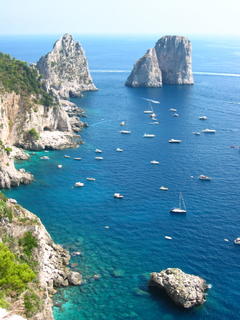 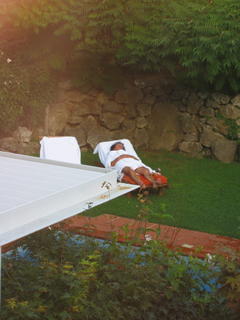 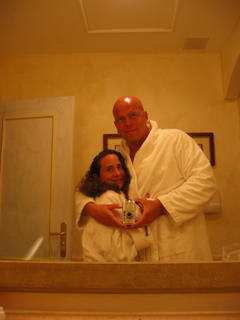 On Saturday morning we went up and down Mount Solaris. Time to hit the pool you say? No! Mrs. TBF suggested that we take a taxi down from Anacapri to Capri (the main town on the island). The sun was shining, I wasn't feeling quite so bloated by this point from the breakfast buffet, and we were kind of feeling like doing a little exploring, so off we went.
We got to the taxi stand (also the bus stop), and we found that our choices were to take a standing room only little bus where we'd be crammed like sardines for probably a couple of Euros (not really sure how much it costs) after waiting in line for a minimum of fifteen minutes.....OR....jump into a taxi which cost 15 Euros. Oh...I forgot to mention that the taxi is like an open sided mini-van with a rag top. For us it was a no-brainer. We jumped into the taxi and enjoyed the breezy ride down the switch-back, and incredibly narrow, road down to Capri.
Compared to Anacapri, Capri is pretty crowded and bustling. Also, it's quite a bit warmer. Luckily, we were wearing shorts and t-shirts. Mrs. TBF seemed very comfortable - I, on the other hand, was not. But, despite the beads of sweat forming on my chrome dome, we forged ahead.
We did some shopping, walked down some really narrow streets, and eventually made our way to a nice garden area that had another really nice view of the coastline (first picture). We stopped a couple of times for granita (kind of like an Italian Slurpee...but much better), I made a pit-stop in a public bathroom where I encountered a bathroom attendant mopping the floor who kept muttering "mamma-mia" over and over again (very cool!), and we eventually made our way back to the taxi stand, and back up the switch-back road to our hotel.
Once back in the room, I looked out our window at the person who's staying in the room below us (second picture), and I swear that it was none other than Moamer Kadhafi enjoying a snooze. Mrs. TBF says no, but I'm saying...YES! I'll have to do some snooping around.
We showered up, took this self-portrait of us in our hotel bathrobes (third picture), and went out for a nice dinner at a nearby restaurant where a lot of the locals dine. We had great food, plus the added bonus of great people watching. Italians are DEFINITELY great for people watching. But, maybe more about that a little later...
Posted by The Big Finn at 8/28/2005 06:08:00 PM

Hey guys. Living the dream - it looks awesome. Why don't you ask Mohamar (sp?) if he would like to join you for a drink - then you can scope out a visit to Libya!

Things are good here - school started, work is work - but the weather has been nice - awesome weekend - warm and sunny!

Your blog is very nice and funny. So...

First I had my breakfast with a lot of Mr TBF history.
Then, I rolled out of this gastronomic table to have a little walk in the Sunday article where I better knew Mrs and Mr TBF's life. Fortunately it is right next to the History article so I didn't have to walk too much!
After that, I took a bath in the sea of one of your wonderful panoramic pictures, and went to do shopping inside of the Monday article!
It was a very nice moment, but I forgot my camera and could not take any self-portraits.

I see that you are very happy and take the most of this wonderful trip!

It is nice to follow you in your adventures thanks to Mr TBF's blog!

I which you the best!

Nice to see the weather is almost as nice there as it is as at home! Have been enjoying your garden every morning and evening. Hans sends his regards and says is doing very well indeed.

Nice blog site. We are definitely adding Capri to the Travel list - looks fantastic!! Mrs TBF is lookin' preeeetty relaxed, I must say and especially good in terry cloth cotton !!!!!

Enjoy the pasta, the vino and the wonderful Italian lounge music.

Hi there TBF's!
Glad you're enjoying the time there. Looks absolutely fabulous!