Seeing that it's been pissing down rain (as my British friends like to say) all morning, I took the time to do something from my indoor "Things to Do" list that I've been putting off for a long time. I spent the morning backing up all my photos from the PC onto CDs. I have to say that I'm incredibly lucky that nothing's happened to cause me to lose these photos since I hadn't backed any up since I backed up all my 2003 photos.
After copying all the photos, I loaded the photos from our recent trip to Finland into the Mac so that I can share some with you - the valued readers of The Big Finn's Big Blog. 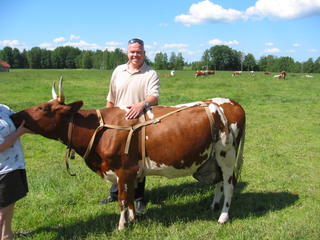 Here's one of my faves... My dad kept telling me that cows in Finland wear bras when their udders are really weighed down with milk. Now, my dad can be a bit of a kidder sometime, and I just went along with it and said something like, "...wow, that's really interesting." So, imagine my surprise when we were pulling out of his sister Liisa's driveway one day and he told me that we were going to go to the farm next-door so I could see "...kun ne lehmät pitää rinta liivit" (when the cow's wear bras). We pulled into the driveway, my dad told them who he was, and he said that his son wanted to see a cow wearing a bra. The farmer's wife and farmer's daughter brought us out to the field and pointed to this cow wearing...well...a bra! I decided to get a closer look, but first I had to negotiate the electric fence.
Now, normally this wouldn't be a big deal. But, since my father was standing there next to the fence, I knew I had to be on my guard. See, my father tends to like to show-off how he can grab a hold of an electric fence without it seeming to have any negative effect whatsoever. If I touch the thing for a millionth of a second - I'm in full-blown arryhthmia. My dad touches it? Nada! He doesn't even flinch. What's worse is that I can tell by the twinkle in his eye that if I get too close to him while going under the fence (there's no chance I'm going to try to hurdle the thing...guys know why!) that he's going to grab a hold of the fence...then grab my forearm with a Kung Fu grip so that I can feel the voltage until my eyes start to bleed. I have to clarify that it's not that my dad's being mean. I think it's just that he feels that his son should be able to withstand voltage equivalent to San Quentin's electric chair. I let him talk me into the old "...let me grab the fence and then grab a hold of you" thing twenty years ago when we were in Kauhava. And...there's no way I'm going to fall for that one twice. I even seem to recall him trying to talk me into peeing onto the fence - but that might have just been me hallucinating after acting as conduit for a million volts of electricity.
So, after making my dad stand about twenty yards away from the fence, I made my way under the fence (very quickly!) so that I could go look at the cow bra. Then, I had my dad take a picture of me actually touching the cow so that I could say that I've touched a cow recently.
It's too bad I wasn't heading straight to the U.S. after this trip. You know how they always make you fill out that form on the plane, and one of the questions is something like "Have you been at a farm or near livestock recently"? I kind of have this desire to answer yes and see what happens. Do they bring you in a room and spray you with some kind of disinfectant? Do they send you back to from where you came? Does anybody know? If so, let me know.
Also, I'd like to point out that not only did I touch a cow - but I also drank unpasteurized milk that had been milked from a cow just a few hours earlier. Unfortunately, my aunt doesn't have cows anymore, so I couldn't have her squirt milk right from the udder into my mouth like she did twenty years ago. But, I'm happy with the fresh, unpasteurized milk.
And...what did YOU do this summer?
Posted by The Big Finn at 8/15/2005 08:02:00 AM

So what exactly does the bra do? I grew up on a farm and I've never seen such a contraption before.

My father told me that the cows sometimes step on their own udders while getting up off of the ground, and this can do some serious damage. I think he said that they can actually tear their udders, but don't quote me on that. All I can say for sure is that I saw some pretty big udders, and the bras were definitely performing a valuable service.
TBF

cow bras. this is a new frontier of traumatic.
my mil bugs out for unpasteurized milk too. she buys it from the butcher and it still has flies floating in it. then they fight over the cream.