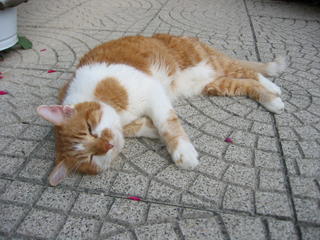 The weather this past weekend wasn't all bad. But, it was close.
Friday night: rain.
Saturday morning: iffy but clearing.
Saturday afternoon: sunny and warm. As a matter of fact, we even brought King up on the rooftop.
For some reason, he hates going into the stairwell that leads to the rooftop (...probably thinks he's going to the vet!). So, after howling for the entire trip up the stairwell, he acted like it was no big deal as soon as he was outside. He snifffed around a bit, explored a bit, and then made a bee-line to the part of the roof that isn't landscaped (...kind of a prairie planting). He ate some grass, and then about a minute later hurled up a couple of nice hairballs for us. Obviously, hurling up hairballs is exhausting, so he had to take a bit of a nap on the warm tile (above). 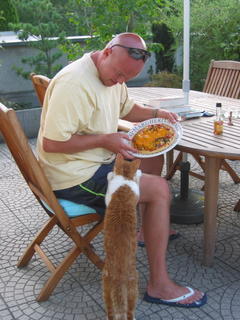 After a bit of a nap and feeling like his stomach was a bit empty (now that the hairballs were gone!), it was now time to share the pizza that Mrs. TBF brought upstairs. It's been almost fifteen years since I last ate a pizza without having to share it with/guard it from a pet. I guess it's a small price to pay when sharing a house with the little beasts.
Saturday evening: The weather was clear, and we enjoyed a nice dinner at Mr. and Mrs. Diagnostic Dave's house. I ate too much, started getting groggy, and then struggled to stay awake when making the 8-minute drive home.
Sunday: THE WEATHER SUCKED!!!! It was cool and rainy and we didn't really go outside too much.
Today (Monday) has been pretty much the same as yesterday - rainy, cool, miserable. I can't even get motivated to go to the gym. So...I won't. I'll go out and walk Sam and George in a little while, maybe stop at the grocery store, and that's about it. Sorry this blog is so boring, but that's just the kind of day it's been.
I NEED SOME SUNSHINE...NOW! It's only eleven more days until we leave for Capri - THANK GOD!!!
Posted by The Big Finn at 8/15/2005 07:43:00 AM

my cat doesn't eat people food, he likes these nasty pieces parts things from whiskas. then again, your cat probably isn't white trash like my cat. I try so hard to poach him fresh fish and all he wants is pieces parts processed food.