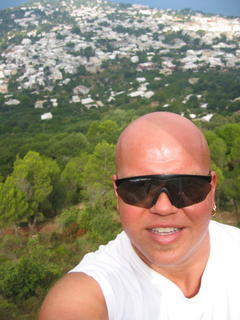 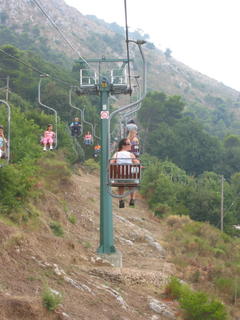 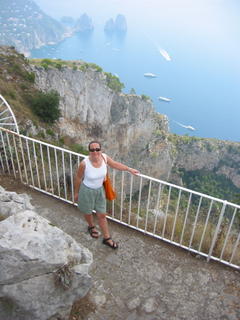 One of the things I enjoy best about going on vacation is the hotel breakfast buffet. It seems that hotels throughout Europe pretty much tailor the breakfast buffet to suit English and American tastebuds, so you'll always find plenty of good stuff like scrambled eggs, bacon, sausages, smoked salmon, etc. You also find the stuff that Mrs. TBF likes to eat like fruit, yogurt, and all the other lame, non-fattening stuff that TBF tends to avoid. So, yesterday morning, we woke up to our first full day in Capri, got ready in a hurry, and went down to the buffet...with gusto!
Mrs. TBF, as always, showed much self-restraint, and pretty much stuck to the healthy stuff. I, on the other hand, gorged on something like ten scrambled eggs, more bacon than a human should eat in a lifetime, and enough sausages to send the kitchen staff into a frenzy defrosting frozen sausages from the freezer to keep the rest of the buffeters (is that a word?) from rioting.
I rolled out of the dining room with a nicely bloated belly, and I would have been perfectly content heading back to bed. But...Mrs. TBF reminded me that we had planned to ride the chairlift up to Mount Solaro.
Fortunately, the chairlift station is right next to our hotel. If it had been much more than the one-minute walk from our hotel lobby, I doubt I could have made it. So we paid our six Euros each, and up we went.
As any regular reader of The Big Finn's Big Blog already knows, I have a penchant for taking self-portraits. Saturday morning was no exception. The first picture is a self-portrait I took on the chairlift with the ever-shrinking Anacapri disappearing in the background. In the second picture, I snapped a picture of Mrs. TBF enjoying the scenery on the way up to the highest point on Capri. The final picture is of Mrs. TBF standing with hazy, but still rather impressive, scenery in the background.
I was happy to find that there is a café at the top of Mount Solaro. Maybe it was the altitude, or maybe it was the massive amounts of salt I must have consumed at the breakfast buffet, but I was rather parched by the time we had spent a few minutes viewing Capri from above. After a quick drink, we jumped back on the chairlift, and were back in Anacapri a short ride later.
Posted by The Big Finn at 8/28/2005 05:34:00 PM