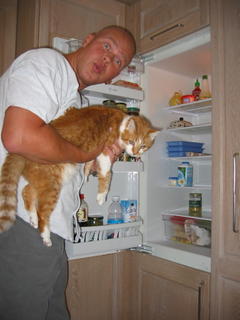 Our new refrigerator was delivered this morning. The appointment was for 8:00 a.m., and our doorbell rang at precisely 8:00 a.m.! The new fridge was needed because the old one had developed a new feature - an iceberg.
The old fridge was defrosted (yes, you actually have to defrost refrigerators here!) right before we went on vacation. When we returned from Amalfi, the new iceberg was already forming. So, a quick call was made to the landlord, the new fridge was ordered, and a few days later a message with a man speaking in Swiss-German was on our answering machine. Within the message was a word that kind of sounded like kuhlschrank (refrigerator) so I figured it was somebody calling for a delivery appointment. Fortunately we have caller-ID, because I never would have understood the way the guy said his phone number. When I called the man back, he actually seemed to understand my German. However, I couldn't really understand him when he spoke to me. I told Mrs. TBF that we had an appointment for Thursday morning. The problem was that I wasn't 100% sure whether it was for today...or next week. It turned out that it WAS for today, and even though King couldn't really give a rip, I think that everything's really, really cool!
Posted by The Big Finn at 9/15/2005 07:29:00 AM

Where's the rest of the fridge?

Welcome to Europe, my man. We're lucky. Under the fridge is a freezer, plus behind my left leg is another Switzerland to have two refrigerators in their kitchen. Plus, we have another refrigerator that we bought which pretty much holds beverages and Asian cooking ingredients. AND...we have a chest freezer. We're living LARGE!