It's A Finnish Thing.

That's what Mrs. TBF said when I told her that I gave money this evening to an accordian player who was busking near the Basel train station. I don't know what it is, but I just can't pass up an accordian player on the street without reaching into my pocket to pull out a couple of francs.
Maybe it's the fact that I'm impressed by the fact that somebody would openly admit in public that they know how to play the accordian (fairly high on the nerd-alert scale as far as I'm concerned). Or maybe it IS a Finnish thing. Afterall, Finland IS a country where the accordian is VERY popular. Don't believe me? Here are a few pictures that I snapped off of the T.V. at my Aunt Leila's house when I was in Finland this past summer. 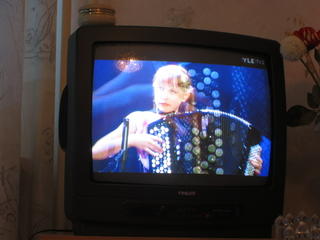 These pictures were taken as I sat dumbstruck in front of the T.V. watching the Finnish National Accordian Championships. Yeah, it's kind of amusing. But, I have to admit that I kind of began getting sucked into all of the action. I had to - my dad and aunt were pretty serious about watching the hoopla, and I was just being shushed each time I tried make any comment whatsoever. 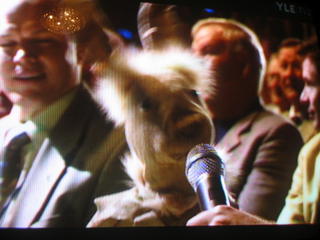 OK...OK!!! So what if the winner was announced by a hand puppet? It doesn't take anything away from the fact that great accordian players in Finland receive near rock star status. 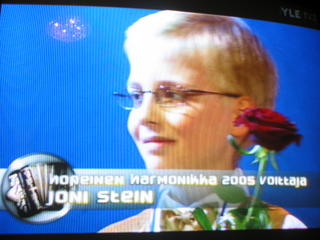 And who was the junior Hopeinen Harmonikka 2005 Voittaja (Silver Accordian 2005 Winner)? None other than a young lad with the very un-Finnish name of Joni Stein! I'm telling you...this kid has groupies!! There's no doubt about it!
You might think that this was about all the excitment that the Finns could handle in one year. But no!!!! The Finnish National Tango Championships were taking place the following week. I'd say that that might be the pinnacle of all Finnish competitions. But, alas, that's for another blog on another day.
I need to rest now.
Posted by The Big Finn at 9/28/2005 03:24:00 PM