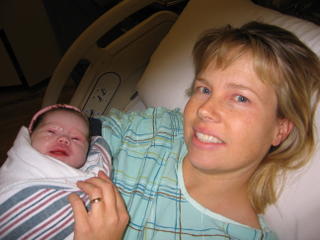 This is my sister Diana and the new addition to the family - Sinead (Hey kid...you're less than a day old and you're already on the world-wide-web!). She was born this morning around 7:35 a.m. Chicago time, and she weighed in at 8 lbs. 4 oz. which is actually two more ounces than Uncle TBF was when he was born. Mother and daughter are doing very well!
My sister called me from the recovery room less than two hours after Sinead was born. If I remember the facts correctly, Diana and Colm (our brother-in-law) left for the hospital around 7:00 a.m. Diana was in labor, but thought there was plenty of time. WRONG!!! She said she got into the hospital bed around 7:20 a.m., her water broke, and she had the baby about fifteen minutes later!!!
I hope the doctor was wearing a catcher's mit!
This is number four for Diana and Colm. Sinead will be well looked after by her older siblings: Fiona, Kiera, and Finn. Also, Mummo and Pappa (my parents) arrived from Canada this past Wednesday to help out.
Mrs. TBF and I will be going to Chicago a week from this Friday. We can't wait!
Posted by The Big Finn at 9/27/2005 05:42:00 PM

That is one of the cutest newborns I have ever seen! Normally newborns look like Gremlins or something but she is really, really pretty. Please tell your sister congrats.

That may be the most Irish-sounding family ever...congrats on your uncle- and aunt-hood.

The names may be Irish, but my dad will tell you that those kids are 51% Finnish.