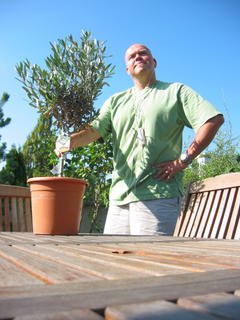 ...on my "Things To Do List"!
About a week ago when we were lounging next to the pool at our hotel in Capri, I managed to open my eyes long enough to notice an olive tree in a planter about ten feet away from me. I told Mrs. TBF that I thought an olive tree would be a nice addition to our garden.
This morning, that thought became reality. I drove over to Wyss Nursery in Oberwil, and plunked down 48 CHF on yet another plant for the rooftop. They had bigger olive trees, but since the tree will have to come inside during the coldest part of winter I thought it would be a little less work lugging a two foot tall tree inside instead of a six-footer. Plus, the big trees were 155 CHF (...I didn't want an olive tree that badly!).
Now that we have the olive tree, all we need is some sort of statuary (I'm looking for a miniature "David".) and Mrs. TBF will have her own "little Italy" on the rooftop.
Posted by The Big Finn at 9/08/2005 07:12:00 AM