I didn't realize it until Mrs. TBF and I were on the 5:05 p.m. train on Thursday evening heading toward southwest Switzerland that it had been THREE YEARS since I had last been in Nyon. Sure, I had been in both Lausanne and Geneva earlier this year. But, it had been a full three years since I had been in the town where Mrs. TBF worked (and had an apartment) for nine months in 2002. I'll officially go on record as saying that I miss it a lot, and I'd move there in A SECOND!!! I'll even go a step further by saying that if we moved there I would be perfectly content living the rest of my days as a Swiss resident (sorry Mom and Dad!)! French flair...Swiss safety and security - an unbeatable combination!
Our friend Jeanette picked us up at the Nyon train station. After dropping our bags off at her place, we left for a town called Bogis-Bossey where we ate a wonderful meal with Mrs. TBF's work colleagues at a place called Auberge de Bogis-Bossey.
The meal was great. I felt a little bit guilty about the fact that I was sitting next to Atul (a vegetarian), and I order foie gras for my appetizer and veal organ meat (ris de veau) for my main course. OK...I felt guilty for about four seconds, and then my body was taken over by my carnivorous instincts. We drank some nice French wine, ate some nice French cheese, and had a really nice time. 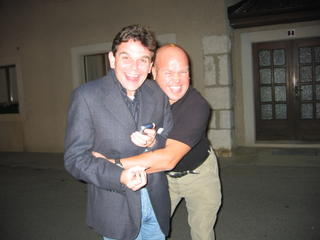 I was ready to give Switzerland a big green finger until I moved down here in Suisse Romande. Now I too never want to leave. Actually, in retrospect, I think I just hated Zurich, I think I could be happy in Basel, and I know I would hate Geneva. But Lausanne and La Cote (I work near Nyon) = La Good Life! I so agree with you. Something about the mix between Swiss and French.