Here are a few pictures from this past Saturday when Jeanette, Mrs. TBF, and I took a little day-trip from Nyon to Yvoire, France. It only takes about twenty minutes, and it's well worth the effort. Uhhh...I guess it doesn't really involve that much effort. I'll post the Yvoire pictures a little later. 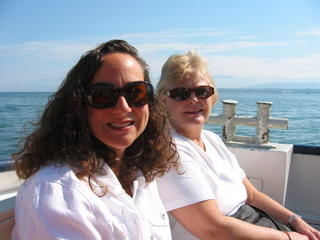 This picture was taken on the way to Yvoire. Jeanette and Mrs. TBF looked pretty happy even though they had to endure my complaining about the fact that this particular boat did not have a first class section (REMEMBER: TBF IS a travel diva!). 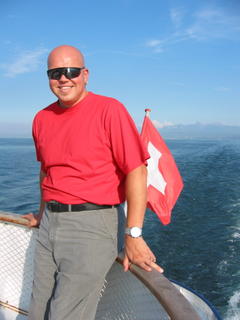 This picture was when we were heading back to Nyon. It was actually Mrs. TBF's third attempt at taking my picture. Her first attempt was basically a picture of my sunglasses and nose - you couldn't even tell I was on a boat for God's sake. The second attempt included my mouth and chin - still no water showing. The third time was the charm - you can tell that I'm on a boat! 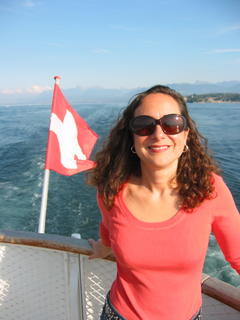 Finally, this picture is of the beautiful Mrs. TBF. It was sunny, warm for late September, with Yvoire growing ever smaller in the background.
Posted by The Big Finn at 9/27/2005 04:48:00 PM