Here's what's been happening over the past few days...

Saturday: Mrs. TBF and I woke up together in our own bed for the first time on a Saturday morning since October 1st. I was home on one of those Saturdays, but here's where Mrs. TBF has been:

Simon, Rosemarie, Alex, and Antonia came over for dinner on Saturday night. The kids were parked in front of the electronic babysitter (Cartoon Network) while the adults enjoyed the multi-course dinner that Mrs. TBF had prepared. Here's a picture of Simon, Rosemarie, and a couple of very tired children right before they left in the wee hours of Sunday morning. 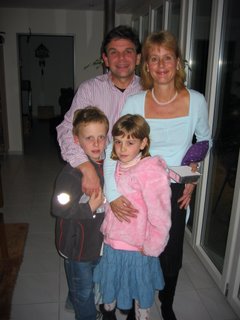 Sunday: It was a sunny day, so we went up to the roof to enjoy a bit of chilly sunshine. I sat on the "stench bench" and smoked a cigar. Mrs. TBF read some magazines and told me "...you stink!" from time to time (It's a TBF cigar smoking tradition!). Afterwards, we decided to go for a walk (Mrs. TBF: "What did you do with my husband?"). We walked up the Bruderholz hill, along some walking paths on top of the hill, and back down the hill to our house. Total time = about one hour. I have to say that it was a very pleasant walk (hopefully Mrs. TBF won't read this or I'll have to do it again!). On Sunday evening we watched some football (NFL, not girly soccer), and that was about it.

Monday: I can't really remember anything except having a French lesson (I suck!), and that's about it. I guess there wasn't too much excitement going on.

Tuesday: Mrs. TBF and I both woke up at about 3:30 a.m. for some reason. I wasn't able to fall back to sleep until 5:00 a.m. I'm not really sure why. Stress? No. Hmmmmm....who knows. I spent the day being tired, blew off the gym, went to Qualipet, Media Markt, IKEA, and Coop.
At Coop, I ran into Gretchen of Expatter fame. Actually, we were...like two bloggers passing each other on a grocery store escalator during the afternoon. How poetic! We had a nice little chat in the wine department about Thanksgiving and Christmas plans and then we went our own separate, blogging ways.

Wednesday/Today: I received an e-mail from Leading Hotels of the World regarding holiday specials. One of the hotels they listed was the hotel we'll be staying at in Vienna over Christmas. I clicked on the link and....to make a long story short...ended up cancelling the old reservation, making a new reservation, and upgrading our room one level while saving SEVERAL HUNDRED EUROS in the process. I guess being on an e-mail mailing list CAN have its advantages. Thanks Grand Hotel Wien...I know your intent was to fill up empty rooms instead of receiving less revenue for the rooms that are already booked, but...you can't win 'em all!
Saving the money in Vienna will come in handy. I just got our Visa bill in the mail with charges from Bangkok and Paris. YIKES!!!
Posted by The Big Finn at 11/23/2005 06:45:00 AM

Wow - sounds exciting. I miss having a top patio and being able to look outside. MAybe we will get that back soon when we move.

Did you know your page was blank yesterday? Oh well - it's back today and that is what counts.

Yeah, I knew it was blank. I have no idea why.