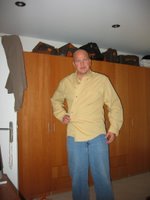 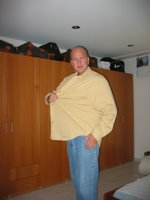 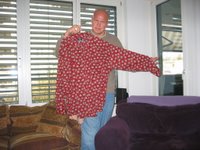 I've spent the better part of this morning doing the big summer to winter wardrobe switch. In Chicago, it wasn't really a big deal - we had ample closet space. In Switzerland - no closets, just IKEA wardrobes. So, clothing storage is at a premium and we have to transfer clothes between our downstairs storage area and our bedroom wardrobes. Plus, this year there's another factor to consider.
I've lost nearly 9 kilos/20 pounds on Weight Watchers since September 5th. OK, I'm not going to turn this into a commercial for WW, but I'd just like to say that it's worked for Mrs. TBF, my brother-in-law, my sister, my mother, and me...so far. I started at 250 lbs./113.6 kilos on September 5th, and I just weighed myself a little while ago...231 lbs./105.1 kilos. I was really losing at a fast clip, and then it slowed down a little bit when I went to Chicago and Bangkok and partook in self-imposed gorge-fests, but I'm back on track. Actually, I only gained a couple of pounds on each of those trips, and then I took it off right after returning home - so, no big deal.
My goal weight is 217 lbs./98.6 kilos. That's what I weighed when I graduated from college. According to the weight charts, I have to weigh 208 lbs. to be at the high-end of the normal range for my height (6'5"/195.5 cm.). I think I'd be skin and bones at that weight, so let's not get crazy here.
All this weight loss has prompted my to start getting rid of some of my "fat" clothes like this "Dijon mustardy" number. This is a very, very good thing - especially when you consider the fact that some of my shirts are well over ten years old. You read that correctly...OVER 10 YEARS OLD!!! Take, for example, the wine-colored diddy I'm holding in the picture. I have a picture of me holding my niece Deanna while wearing that same shirt. In that picture, Deanna is probably five or six years old. She'll be nineteen this December. YIKES!!! As a matter of fact, I ended up going through the photo albums and I discovered a plethora of photos circa 1993-1995 with me wearing the various shirts that I'm getting rid of today. I've done the seasonal clothing switch year after year only to give these shirts the "one more year" reprieve. Not this year. They're all going to the charity bin. Somewhere in Switzerland, there's going to be a very large man who's going to get some stylin' shirts. Well, at least they were stylin' a dozen years ago. Actually, they're still in pretty good shape.
(Snap out of it, stupid...) I better get going to that charity bin before I change my mind.
Posted by The Big Finn at 11/09/2005 04:30:00 AM

Congrats on the weight loss! I've been procrastinating the seasonal clothing switch because I can't bear to get out the turtlenecks. By the way, I just got a bag in the mail saying that they're doing a pick-up for clothing donations on Wednesday, November 30. Just in case you can't find anyplace to take your old, yet stylish, shirts...

Did the same clothing thing at the end of last winter, but the wrong way: got rid of all the clothes that I no longer fit in that depressed me to look at... and some of the clothes that, even if I did fit them, they looked good when I was 18 but closing in fast on 30, it was time to get rid of the mini-mini skirt.

Good: lost all the weight this year
Bad: miss the clothes I got rid of and need to buy lots of new pants (or much better belts)

While I was in France/Swiss border I lost a ton of weight. I loved being able to walk and then jog every morning next to the house on the path. My meal portions were so much smaller and I guess my weekly trek on foot into Basel also helped. I miss that a lot as the portions here are so big. When I first returned, I could barely finish half my plate and I only could have a small drink. Things have changed in the almost 2 years but I haven't gained much weight since being back in north america.

Congrats on the weight loss!

I have a shirt from 1993 that still hangs in my closet. I can't through it out though because it will be vintage soon!